A fast paced game of terrifying alien invaders, futile human resistance, and 50's SciFi Movie Action. Players each take on the role of a different alien Race, all part of invading armada, but each with their own unique abilities and ambitions. Unleash waves of flying saucers to blast human resistance into submission with death rays and terrifying weapons of war as you unleash powerful alien technologies on earth (and other alien races if they get in your way). But beware these pitiful humans are not defenseless. They will fight to the last to defend their planet, aided by countless platoons of army soldiers, powerful human heroes, and their most deadly weapon, the dreaded atomic bomb.

Featuring a modular game board, 10 different alien races to play (such as the Orzax, master of technology, or the Venezian Matriarchy, beautiful but deadly space amazons) a host of Human resistance to battle, and four game types - competitive, cooperative, team game, and Solo Play. Conquest of Planet Earth is a strategic game of maneuvering, backstabbing, and fantastic battles for alien conquest.

Features a collection of beautifully illustrated artwork including over 100 unique images.

Four game types - race against friend in competitive or team play, and be the first to conquer earth to impress your alien overseers, or cooperate as complete alien armada to sweep over the world and defeat human resistance. Also this game may be played Solo.

No two games are ever the same! There are many alien races to play and large decks of game cards, giving a great variety of gameplay. By rearranging the different boards each game along with the amount of human resistance to battle the aliens, there is a high level of re-playability.

Fast Paced games with easy to learn rules allow players to jump right into the action while strategic depth and strong cooperative/competitive play keep player coming back for more.

Excellent bridge between simple family games and deeper, more advanced board games. Easy enough for casual gamers/non gamers to enjoy, while exciting and strategic enough for hardcore gamers to love.

Expandable Design allows for many expansions and strong web support to create a loyal fan base/community.

Note: The summary is a little out of date, the game contains 16 alien saucers and 4 allied models. They are however all detailed and of a high quality.


And the description for the Apocalypse expansion is as follows:


Conquest of Planet Earth: Apocalypse, an expansion for ''Conquest of Planet Earth: The Space Alien Game'', includes new alien races (one of them being the Martian Confederation from FFP's ''Invasion from Outer Space''), new allies to help those invaders, and new cards for all other decks in the base game. The expansion includes a new "Coastal Resistance Deck" that boosts Earth's defense forces with naval ships, submarines, and jet fighters. 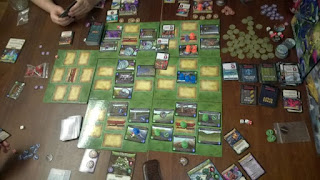 I'm of two minds on this game but could go either way: one being to write it off as not worth playing and the other to adjusting it with a few house rules to remove huge "swinginess" due to luck.  It has a few flaws that I think are hugely problematic.  It is meant to be a fast paced game but throws a lot of math at the players at the beginning of combat while simultaneous requiring all players to be aware of the cards they have available too them during every combat.  For some players, this isn't a problem.  For players that have analysis paralysis, this will bog down every single combat which can happen one or more time during each player's turn.  The randomized locations deck means some player might draw very little they can utilize to gain victory points close to their landing zone while it is possible to draw as few as two location right next to the landing zone that allows victory on turn one, possibly before anyone else has even had a turn to play.  If opponents have no applicable cards to stop that player, which is a very real possibility, they simply move their aliens on turn one, roll a few combat dice (and play a card or two), and the game is over.

Furthermore, mitigating this luck is incredibly difficult due to the short nature of the game.  With only 8 victory points needed to win, which can be done on one or two turns, there is little time to implement a strategy that offsets the luck of drawing certain cards or rolling a few well-timed sixes. Since a six always wins a combat, regardless of the strength of the alien force or resistance, a combat could be 1d6 plus zero versus 1d6 plus 20 and still go either way when a six is rolled by one side or the other and considered an overwhelming victory.

If I were to get talked into playing this again I would want several house rules in play.  I would want the required victory point total for a win to be 20 rather than 8 to ensure some direct player interaction and a chance to mitigate the rampant luck inherent in this game.  I would want no more than half a player's victory points to be able to come from their landing area board.  I would also want for combat to not require a roll if one side or the other had six more pluses than their opponent.  I might also like to see the auto-win on a six be removed but with the previous house rule this might not be as much of a problem.  I have no idea if the problems baked into this game were by design or despite it but they make for a game that is heavily based on luck.  I suspect the latter since I cannot imagine a game design that is aware that a game can end before one or more players have even had a turn.  That definitely seems like an oversight which in turn suggests some of the other problems slipped through unnoticed as well. 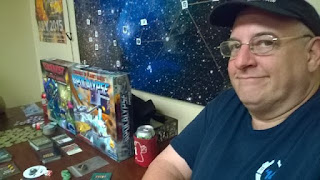