Alien Frontiers (2010) gets to our local table A LOT since we discovered it, even though that was some years after it was originally published.  We've been adding in the expansions from time to time as we've gotten to know the game better over the last year or so.  At times, we've even just played a quick game or two of the base game and that is still just as enjoyable.  I really can't say enough about the balance an replayability of this game.  We added in the Factions (2012) a couple/few games ago but this session report focuses on our most recent game in which we added the Outer Belt (2014). 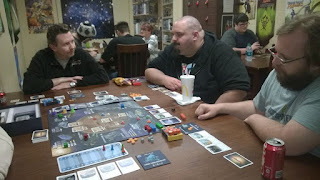 And the Factions expansion description is:

Ship and colony tokens for a fifth player.

Factions (thus the name), with each faction providing its owner a special ability and new orbital facilities under his control.

Agendas, which are hidden objectives that allow a player to earn bonus points at game's end or when the agenda is revealed in-game.

New Alien Tech cards, such as the Lunar Tunneler, which will allow its owner to pay one fuel to receive an extra ore when using the Lunar Mine. This card's discard power will send all ships docked at the Lunar Mine to the Maintenance Bay, which can be useful when the Mine is clogged with high-value ships.

And the Outer Belt expansion description is:


The Outer Belt expansion to Alien Frontiers adds ships and colony tokens for an additional player and expands the playing board. This side-board expands the moon with a new territory, and introduces the nearby Asteroid Belt. Asteroid Counters move through the belt during the game, changing their docking requirements as they change their positions. Staking a claim to an Asteroid will give you resources, a derelict ship, or new alien devices. Outer Belt can accommodate 2 to 5 players (up to 6 players when combined with Alien Frontiers: Factions). 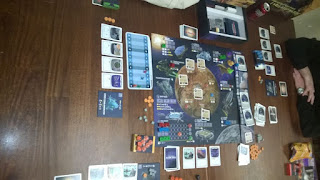 First off, a shout out again to how well this game packs up with the dedicated boxes and design that allows these expansions to work their way into the original box, which never seemed all that empty in the first place.  It's impressive how well all aspects of this game have been thought out.  Anyway, this session included the Outer Belt and it was Norm who took greatest and fastest advantage of that expanded set of resources.  I think we probably didn't keep him in check well enough as he started exploiting that and it showed again how every corner of the board needs to be watched lest someone find new and clever ways of getting their colonies swiftly into play.  Good stuff! 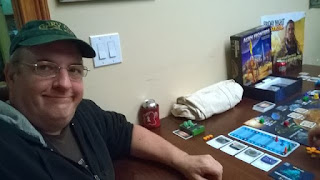