Space Barons is an unpublished 3X game (no eXtermination, just eXplore, eXpand, eXploit) set in the Felithian universe in which many of the space games Tom Wham creates reside.  Tom, John, Ernie, and I have all played this one before and the playtesting continues apace, this time at Lake Geneva Games.  Check out the LGG Facebook page here. It's a fairly straightforward game where players act as captain of a single space trading vessel which they can upgrade.  They set up a network of "Transporters" which allow them to launch from a planet or they can pay their opponents to use one of theirs.  Players draw trading contracts  and fulfill them to collect credits while avoiding hazards that only Tom Wham could create with clever names and humorous artwork. 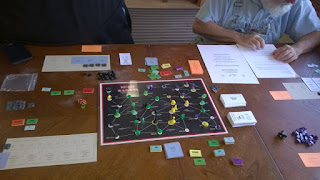 The game is great fun and this one is close to complete, I think.  A few tweaks to the drawing protocols should square everything up.  I attempted a strategy of not upgrading my ship while only taking nearby contracts and building a network of cheap transporters all of the galaxy.  This left me pretty far behind at the end.  I'll make some adjustments of my own next time I play as well. 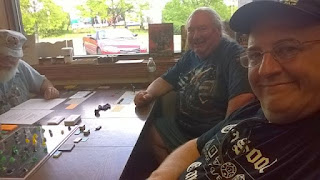