There is an old game called Can't Stop by Sid Sackson that sees a lot of play around these parts.  It's simple and has a compelling press your luck component that is fun and addictive.  I've blogged about it previously here.  Though designed for two to four players, with some added components from extra copies of the game, we often play it with as many as seven or eight players and just require two rows be captured for a win instead of three.  It plays about the same length of time that way as a game with fewer players. 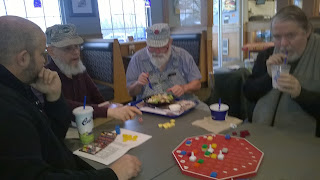 The Board Game Geek description runs as follows: 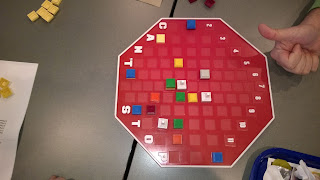 This game never ceases to be fun for our group.  A lot of the same trash talk and jokes get repeated but they never feel old or stale.  A lot of other table talk can transpire during this game because it requires little focus when not your own turn and we're often coming up with ideas for house rules and modifications, so there is some game design undercurrents every time we play.  Great fun! 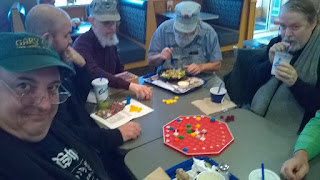