You might recall that I've mentioned Kickstarter projects by John Popson a couple of times on the Saturday Crowdfunding Roundup like the "Big Bastards:80mm Troll Miniatures for 28mm scale games" and "Metamorphosis Alpha™ 28mm Miniatures," both of which have successfully funded (and more).  Both are the works of Effin Cool Miniatures here.

John was recently in town on business, so I invited him to join our weekly group for a bit of gaming.  We had a game of [redacted] (2010) planned, something we'd tried to get on the table in the past but it hadn't worked out.  We got it on the table that night and I'll have a brief writeup on the game this Saturday.  Short version: We had fun!  While John was here, I was also able to secure a set of the Big Bastard minis for myself and plan to get them to the table soon.  More on that as it develops as well. 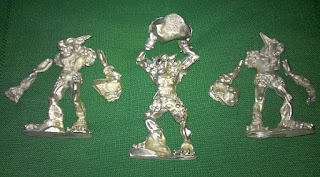 While they were early in production, John asked the fine folks at Pennyfew Painting to do a number on one (this one is called "Plash!") so folks could see how it turns out.  Here's a preview below, with a dwarf mini for scale (these trolls are huge!), but there are even more picutres here. 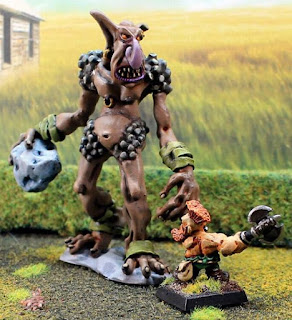 My sincere thanks to John Popson for his friendship and for joining us last week at the game table.  He is a welcome addition any time he is in town.  I know we'll enjoy getting to catch up again at Gary Con VIII!