Nope, I'm not censoring the title of the game, it's actually called [redacted] (2014).  Players take on the role of a spy (or possibly a spy hunter) and attempt to complete a mission alone or as part of a team.  It's a clever game with some good play options and lots of opportunities to bluff.  John brought the game to the table for Norm, Will, and me, and our friend John Popson of Effin Cool Miniatures was in town to join us! 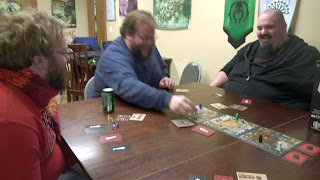 In the game, spies must infiltrate the embassy during the reception that the ambassador holds every year to show how important he is. Moving from room to room, they have to recover files and escape in the helicopter, or make sure that the other side's pilots have a really bad day.

While interacting with each other, the players seek to interrogate, steal or injure when they can. With a double-blind interaction mechanism that never really lets the tension ebb, a skilled agent will need to do a lot more than see through a bluff. 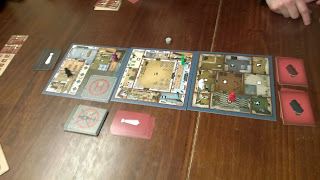 We were all learning the game together, so we spent a bit of time going over the rules and discussing some possibilities for play, then we played three fast games, though not without some difficulties.  Some of the interaction can be complex and requires players to keep their focus lest they accidentally break a rule and look at cards they shouldn't be seeing.  This happened a few times, all through the night, and we fixed the situation when we could so we could keep playing with minimal damage tot he outcome.  I think once folks get used to the game, this would happen less and less but it is good to have someone remind the current player what they can see and what must remain hidden.  Also, some of the icons on the cards are not as explicit as they could be.  Furthermore, we weren't sure why the game board was so small when a larger version could have easily fit within the box and made it less difficult for everyone to see without leaning in over the board and possibly giving away information about their plans.  Other than that, it's a pretty good game and I would enjoy playing it again.  We definitely had fun! 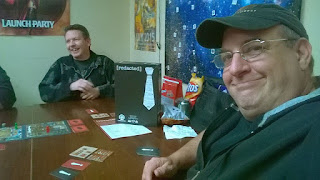