Friend-of-the-blog John found a copy of Mansions of Madness (2011) on sale at a steep discount when he was up in Milwaukee the other week, so he busted it out for the last First Sunday event.  It's one  hadn't played yet though other games in the genre are not unfamiliar to me.  It's well rated on the Geek, so I couldn't imagine why I haven't seen it more often on tabletops locally, at gamedays and conventions. 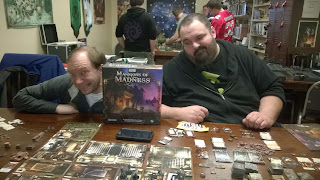 
Horrific monsters and spectral presences lurk in manors, crypts, schools, monasteries, and derelict buildings near Arkham, Massachusetts. Some spin dark conspiracies while others wait for hapless victims to devour or drive insane. It’s up to a handful of brave investigators to explore these cursed places and uncover the truth about the living nightmares within.

Designed by Corey Konieczka, Mansions of Madness is a macabre game of horror, insanity, and mystery for two to five players. Each game takes place within a pre-designed story that provides players with a unique map and several combinations of plot threads. These threads affect the monsters that investigators may encounter, the clues they need to find, and which climactic story ending they will ultimately experience. One player takes on the role of the keeper, controlling the monsters and other malicious powers within the story. The other players take on the roles of investigators, searching for answers while struggling to survive with their minds intact.

Do you dare enter the Mansions of Madness? 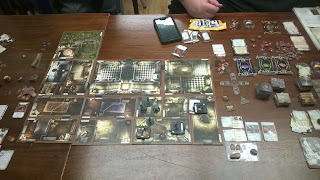 This is definitely a game that can use some prep beforehand and not just some experience as a player.  It expects a lot from the person running the game and there are plenty of details to know when handling the evil faction, so this is not an out-of-the-box-straight-to-table game.  This is also a game for folks who have had some experience running RPGs or gamemastering wargames.  John was up to the task and I think we got through the game without any egregious errors (maybe none at all) but we might have chosen something less involved if we had known this required more prep (and saved it for later!).  Still, it was fun enough and I'd definitely try out other scenarios in the game. 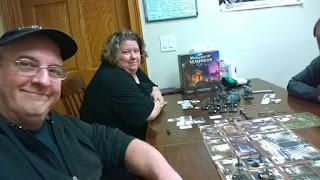