On a recent Culver's day, Tom broke out a card game he'd been waiting to show us for some time called Innovation (2010).  As you can tell, it's been around half a decade and it surprised me that I hadn't heard of it before.  It's essentially a civilization building game with a lot of player interaction. 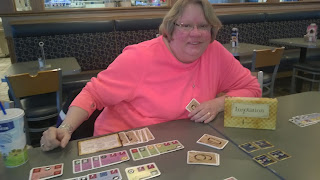 
This game by Carl Chudyk is a journey through innovations from the stone age through modern times. Each player builds a civilization based on various technologies, ideas, and cultural advancements, all represented by cards. Each of these cards has a unique power which will allow further advancement, point scoring, or even attacking other civilizations. Be careful though, as other civilizations may be able to benefit from your ideas as well!

To win, you must score achievements, which you can attain by amassing points or by meeting certain criteria with the innovations you have built. Plan your civilization well, and outmaneuver your opponents, and with some luck you will achieve victory! 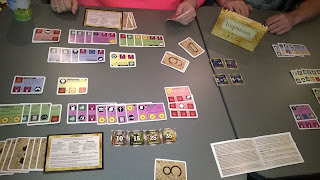 I like this game, in theory.  There are not a lot of rules but in a couple of places the rules stumble and make it tough to learn this game as swiftly as one might.  The cards could be more clear on what they do and the placard each player gets with rules summaries is incomplete in ways that give rise to rules confusion.  Despite all of that, I like this game.  I would play this game again.  I would love to see this game redesigned and re-released.  This game has a lot going for it and could be very popular as a fast-play cardgame if executed well.  Did I mention I like this game? 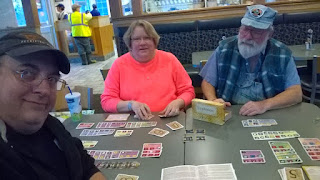