I've had four or five occasions to play Alien Frontiers (2010) , at least once a month since September, but recently when we played we added in the Alien Frontiers: Factions (2012) expansion. 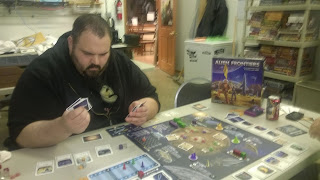 And the expansion description is:

Ship and colony tokens for a fifth player.

Factions (thus the name), with each faction providing its owner a special ability and new orbital facilities under his control.

Agendas, which are hidden objectives that allow a player to earn bonus points at game's end or when the agenda is revealed in-game.

New Alien Tech cards, such as the Lunar Tunneler, which will allow its owner to pay one fuel to receive an extra ore when using the Lunar Mine. This card's discard power will send all ships docked at the Lunar Mine to the Maintenance Bay, which can be useful when the Mine is clogged with high-value ships. 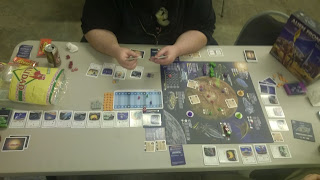 The Factions expansion adds an exciting wrinkle to the game creating new action opportunities and more ways to directly interact with opponents.  Not all of the interactions are detrimental to other players and sometimes even can help them with their resources, something that the base game is fairly lacking.  The hidden agendas also increase the tension of the end game, making the outcome less of a foregone conclusion.  I'll need another time through with the expansion before I can fully grasp the implications of the changes but so far I find it to be beneficial to an already robust and complex game. 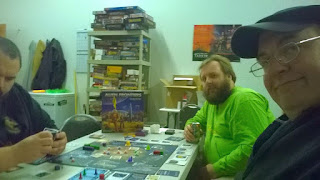