My friend Wendy recently picked up Clockwork Wars (2015) and brought it to the Burlington Gameday for us to try out.  Nancy, Kiff, and myself joined her in their endeavor.  Although Wendy had glanced over the rules and, I think, watch a brief video, we were mostly coming at this from scratch.  That was fine for the four of us playing since we were all in the same boat and all have logged plenty of hours trying out new games, together and with others, in the past.  While this is a recently released boardgame, I would call this a wargamey boardgame despite the very simple battle mechanics because of its area-control aspects and clear use of armies. 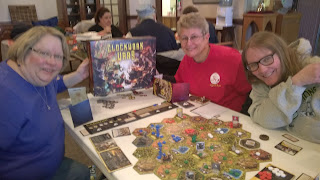 
Clockwork Wars is an epic board game of conquest, discovery, and espionage from Eagle-Gryphon Games. In Clockwork Wars, 2-4 players command a unique race of creatures in a tense war set in an alternate universe where magic and steam-era technology collide. Take control of the human "Purebreeds", or one of three hybrid races (Troglodytes, Rhinochs, and Mongrels). Your goal is to vanquish your foes and accumulate the most victory points through seven turns of play. You earn points by fighting for control of territories that contain valuable natural resources. To win these battles, you need manpower gained by seizing villages and developing them into cities. Invest in research and discover astonishing new technologies, like magical Golems, an Analytical Engine, and the wondrous Spire of the Gods. Position your troops, research powerful discoveries, employ espionage, and conquer your enemies to win the game! 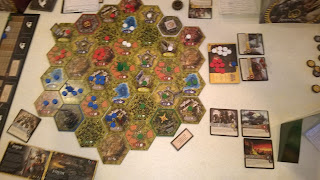 Once we learned the rules and leaving aside a couple of times we checked up on the details of a few things, I think we managed to play this first time through in a bit over two hours.  That's not bad, in my opinion, for a complex game that suggests 90 minutes.  The great variety of technology cards that can come up in many combinations in any given game means that this game will have a great deal of replayability.  I very much like the simple simultaneous deployment (movement) mechanic that reminded me of older wargames without being as complicated.  I'd like to try games of this with two and three players but can already imagine why a four player game is suggested as best.  I'm also curious about the expansions and when we next play will hope we add those in right away, even before we master the base game.  I don't think that would be problematic. 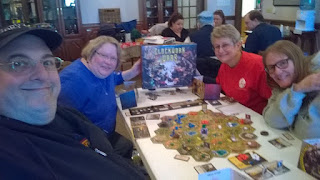