There is a new game that my buddy Mark brought round to Culver's called Mystic Vale (2016).  Tom and I gave it a go with him on a day when they were particularly crowded, so I can't say it got its best showing.  Brian was around to see us get started but had to take off before we could really get going, so we played with three players.  We played most, I think, of a game before deciding we were taking up too much space on a day when they needed it but I feel we got the gist. 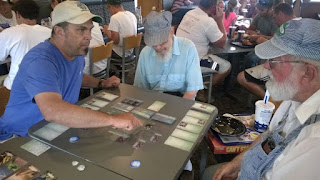 
A curse has been placed on the Valley of Life. Hearing the spirits of nature cry out for aid, clans of druids have arrived, determined to use their blessings to heal the land and rescue the spirits. It will require courage and also caution, as the curse can overwhelm the careless who wield too much power.

In Mystic Vale, 2 to 4 players take on the role of druidic clans trying to cleanse the curse upon the land. Each turn, you play cards into your field to gain powerful advancements and useful vale cards. Use your power wisely, or decay will end your turn prematurely. Score the most victory points to win the game!

Mystic Vale uses the innovative "Card Crafting System", which lets you not only build your deck, but build the individual cards in your deck, customizing each card's abilities to exactly the strategy you want to follow. 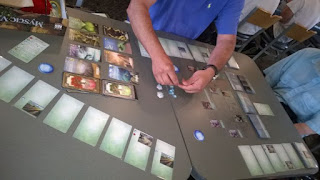 I had seen this game in a trade publication last month and wondered if the "Card Crafting" aspect was more gimmick than worthwhile mechanic but now think it is a good one  While it makes for a bit of setup and clean up time after can be more than typical, I think it is worth it.  I was also concerned about the potential for component damage harpooning the game but it seems a sturdy one.  It might be a good idea to grab and extra pack of the non-standard card sleeves the game uses to ensure they'll always be available to you.  In any event, the overlaying mechanic is a good one and crafting the cards as a way of deckbuilding adds an almost three-dimensional component to the game much like the UP! expansion for Lords of Vegas really adjusts the way that game works exponentially, albeit in Mystic Vale it is there from the start.  That's not to say this is overly complex.  I've only played the once but that's not my gut reaction under conditions that weren't ideal.  There's a good amount of complexity to this that's worthy of more exploration by me.  It feels like a good game that might even be a great one so I'll check this out further. 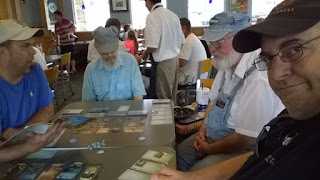