Tom came back to Lake Geneva Games with a copy of Valley of the Kings (2014), so we got right to trying it out.  We liked it enough to put in an order for the first expansion, or rather integration of it, Valley of the Kings: Afterlife (2015), but more on that soon. 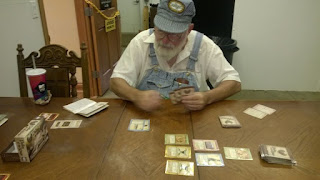 
Take on the role of Egyptian nobles at the time of the pharaohs, preparing for death and burial in the Valley of the Kings. Players want to fill their tombs with food, canopic jars, statues, amulets and other treasures, and to do so they acquire cards that are laid out in the shape of a pyramid; purchase cards at the base of the pyramid, and it "crumbles" to bring cards higher in the pyramid to the base where they can be bought. The pyramid resets each round with new offerings.

You score only for cards that you remove from your deck and stash in your tomb, so if you keep using valuable cards for their effects and don't entomb them before the game ends, you could lose out on big points! Whoever collects the most valuable artifacts in her tomb wins. 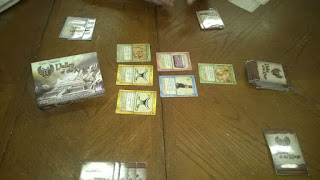 It's very important to keep track of the precise names of the cards and be sure to entomb them before it is too late.  While you don't want to get rid of all of your starting cards (the Shrabti are useful in the end game), you might drop one or two of them early into the tomb while cheaper cards are available.  You'll need value five cards quickly, so grab some of those but having fewer cards overall will also help you get the more valuable cards in the midgame.  Make no mistake, this is a memory game and the rules are specific about when you can look into your discard pile, so keeping track of what you've collected is tricky.  Good game! 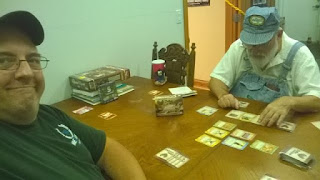