A LOT of Magic the Gathering (1993) gets played at Lake Geneva Games and some folks forget this game has been around for almost a quarter century.  It's had it's share of "lesser" sets released over the years and there was even a time when Wizards of the Coast was likened to Games Workshop for the business model that rotates sets of cards out of the current standard play format.  But with Legacy play being its own thing and the value of older cards rising, most got over that.  Now there are many two-player and multi-player formats, special sets, restricted and banned lists of cards for various formats, as well as a no-reprint list to protect the value of some older cards. 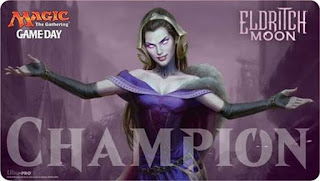 
From the official website: In the Magic game, you play the role of a planeswalker—a powerful wizard who fights other planeswalkers for glory, knowledge, and conquest. Your deck of cards represents all the weapons in your arsenal. It contains the spells you know and the creatures you can summon to fight for you.

This is the grandfather of the collectible card game (or CCG) genre. Cards are categorized as common, uncommon, rare, and mythic rare. Players collect cards and build decks out of their collection.

Players build a deck of cards and duel against an opponent's deck. The first player to reduce his opponent to 0 life (or meet another set win condition) wins the game.

Deck building is major part of the game. There are over 17,000 different cards from which to build your deck!

Players randomly draw spells to see what they get and can play each turn. Although this limits your choices, there is a lot of strategy in how you play those spells. A robust list of game mechanics, including intricate rules for reactive card play called "the stack," provide for rich tactics and tough choices each turn.

Though traditionally a two-player duel, there are several casual and tournament formats to Magic that allow more players to play.

If you've played any other games, you'll see parallels in MtG in the mechanics either because they predate the invention of the game or because so many other games have been built with MtG in mind as inspiration.  There are some events coming up at Lake Geneva Games (check the calendar here) that are notable for regular players and new players alike.  This weekend is the Eldritch Moon Gameday where players can bring their current decks and play for prizes including a champion's game mat.  Next week is the release of From the Vault: Lore, a special set with a limited run.  Finally, new and old players are invited to sign up in-store for the August 27th, 1 pm, Conspiracy: Take the Crown draft.  It's a simple format of drafting (will be taught) with a fun, multi-player game to follow.  Join us for the fun! 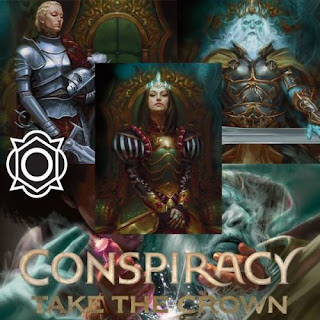