Here's one I hadn't played before but often wished I had (so many games, so little time!) called Roll Through the Ages - Iron Age (2014).  It's from a small but potentially growing line of similarly named Roll Through the Ages games and, from what I've heard, this does a great job of reimplementing the simple mechanics introduced in the Bronze Age version, adding some complexity though it sacrifices some time on the altar.  I'm fine with that.  I prefer a more complex game and don't mind a game taking more than a half hour.  I'm not often rushed for time to play a game and prefer a quick card game for when I am.  This is mainly a dice game but with the small resources board and reference sheets, it really becomes a board game as much as other wise. 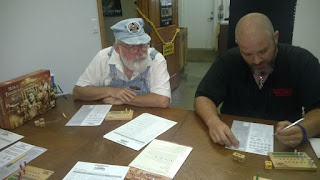 
Roll Through the Ages: The Iron Age, a sequel to the highly-awarded Roll Through the Ages: The Bronze Age, lets you build an Iron Age civilization in under an hour! Do you build provinces, raise armies, and conquer barbarians or build ports and ships to gain trade goods? Explore the strategies of Greece, Phoenicia, and Rome as you erect monuments, fend off disasters, and strive to feed your people.

Roll Through the Ages: The Iron Age gives players different ways to build their empires: the Trade and Naval strategies of the Phoenicians, the conquests of Alexander the Great, and the engineering prowess and gradual absorption of new provinces by the Roman Republic.

Grab those dice — including the Fate die — and prepare to build the greatest empire as you continue to roll through the ages! 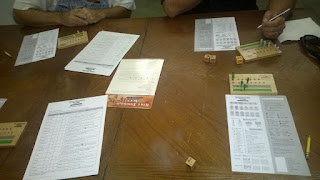 Build fast and strong is the strategy I adopted in this game, forgoing the comfort of my population to gain might and dominate militarily.  It's works pretty well but neglecting the monuments early on is unwise as a handful of points for getting one first can be the difference in the final scores.  This is a winner.  I'll be watching for more of these too. 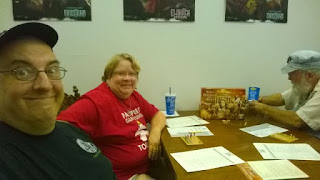