It had been a while since I had played a full-on deckbuilding game when Norm busted out Legendary Encounters: An Alien Deck Building Game (2014).  A few of the guys were playing the first couple of scenarios for Open Boardgaming Thursday at Lake Geneva Games and then I tagged in for the third round for Grant, to join Norm, John, and Dennis. 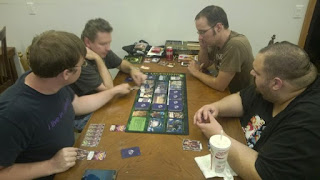 
Legendary Encounters: An Alien Deck Building Game, based on the four movies of the Alien series, is a fully cooperative game with original art. While based on the Marvel superheroes version of Legendary, the two games will be compatible but cannot be fully integrated.

Legendary Encounters is a deck-building game in the same family as Legendary: A Marvel Deck Building Game, but now players must cooperate in order to survive against hordes of aliens. Taking on the role of protagonists such as Ripley, Dallas, Bishop and Corporal Hicks, players take turns recruiting cards for their deck from a central selection in order to improve their deck and defeat Xenomorph cards that are added to the central game board 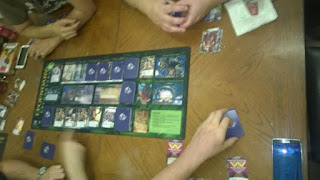 This seems like a very balanced game with tension throughout.  There was no point at which I thought we would get out ahead of the ongoing crisis nor where I lost all hope.  In the end, it came down to some well-played cards and timing but we managed to eke out a victory in the final moments.  I'll need to play this again, perhaps a different themed version of it, to really understand more of the nuances but my gut reaction from a single play is that this needs to see the tabletop more often. 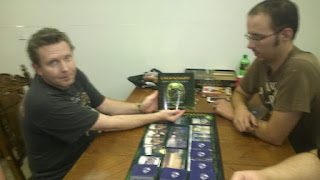