Having played Valley of the Kings (2014) a couple of times and now Valley of the Kings: Afterlife (2015) twice as well, I have a fair handle on how the games are meant to be played.The two have somewhat different playstyles thought the basics are the same.  They've done a nice job expanding on the original game, or rather extending its playability with a second set of treasure cards.  That the game can now be played with more players is an additional boon.  I'd like to try each out solo some time too. 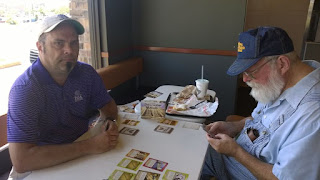 
Take on the role of Egyptian nobles at the time of the pharaohs, preparing for their death and burial in the valley of the kings. Using an innovative deck-building mechanism with a crumbling pyramid, players fill their tombs with jewelry, chambers, weapons, tomb art and other treasures. The player who collects the most valuable artifacts in their tomb wins the game! 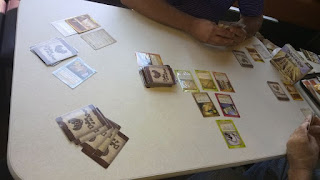 I think I might like some of the mechanics of this second set more so than the first.  It seems to make the game more interactive and bring the boneyard into play to a greater extent.  It's another solid game that should do well in any game collection.  Perfect fit card sleeves work well with these decks too. 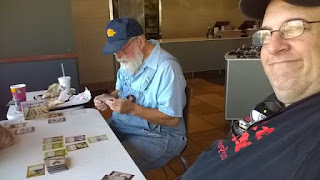