I found a few wargames at the Brookfield, WI, Half Price Books when I was up that way yesterday.  I'll blog about them individually at some point in the future.  The first is a game from Games Workshop from the turn of the century called Warmaster (2000).  I've had a copy of the Ancient Armies supplement for this wargame for a while now and have been watching for the chance to grab a copy of the main rulebook to go with it.  I'm not sure if I will ever put a 6mm to 10mm army together on stands to try it out in full but I might make due with some labeled counters just to give it a whirl.  From Board Game Geek (BGG): "The command mechanism in Warmaster is simple but evocative. Each leader model has a Command factor. To issue a command, such as 'move forward' to a unit, two dice must be rolled against that target command factor. For every subsequent order attempted the target number becomes more difficult to achieve. As a consequence, despite being on the surface a move-counter move system, the turns are variable length and each player may not have the full opportunity to achieve everything they may want to. This simple mechanism introduces enjoyable tension into what is otherwise a largely conventional set of wargame rules." 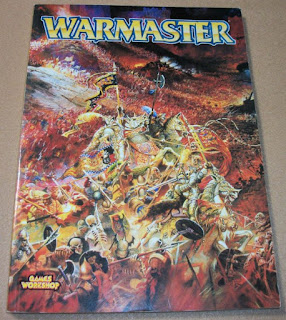 Also, among the boxed games, they had a copy of Hibernia (2008) by Eric B. Vogel from Closet Nerd Games.  I read about this one a few years ago and had it on my list of games to keep an eye out for.  When I spotted it yesterday, after having already found some other goodies, I felt very pleased.  From BGG: "Set in Iron Age Ireland, Hibernia is a fast, simple wargame with strong European-style mechanics. It depends on well-balanced and clever play rather than pure aggression. Die rolls restrict when players can attack or reinforce their positions, and a unique scoring mechanism changes the resources which players need to score points each turn, keeping player positions dynamic." 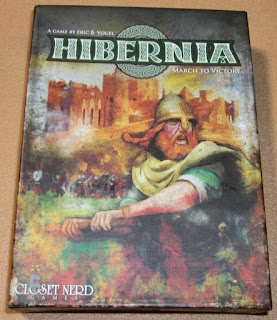 Finally, another Vogel game called Cambria (2009) from the same publisher.  I became aware of this game around the same time as Hibernia and put it on my mental list as well.  From BGG: "It is 400 AD and the Roman occupation of Britannia is drawing to a close. Most of the Legions have been withdrawn. The system of Roman fortresses and roads is only thinly defended, particularly in Cambria. Across the sea, Hibernian warriors prepare to invade… Cambria is a fast and aggressive game of siege combat. To win, the players must make skillful use of their die rolls to surround and capture Roman fortresses. Cambria combines the simple, clever mechanics of a European-style game with the direct player conflict of an American-style game." 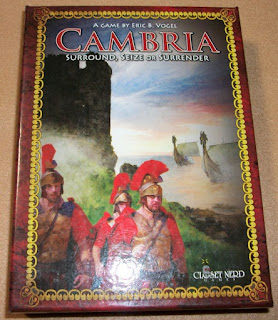