Lake Geneva Games regular, Dennis Smith recently picked up a copy of Onitama (2014) and proceeded to teach some of the rest of us how to play.  It's a two-player game, so we took turns playing one another, being taught as we jumped in or while watching previous games being played. 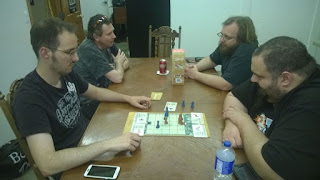 
Onitama is a two-player, perfect information abstract game with a random starting set-up. On a 5x5 board, both players start with five pawns on their side, with the main pawn in the middle. 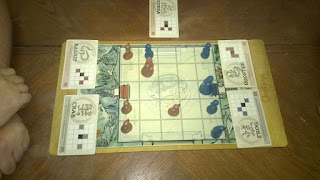 It's a straightforward game with simple rules, a small field of play, and few pieces.  It might be described as akin to chess with fewer pieces, rotating movement rules, and a slightly different endgame condition.  Even with unequal opponents, this game can get right to the action but be sure players agree in advance on time constraints as this ten minute game can be tedious in the hands of a player with Analysis Paralysis.  A thirty second or one minute timer might be a good idea since most games are unlikely to go beyond ten or fifteen moves unless both players are being particularly cagey, which would make that game more engaging anyway.  Good stuff and one to carry along for quick setup and play just about anywhere. 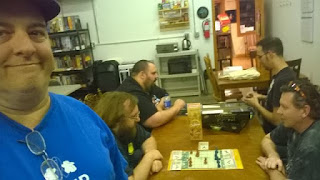