Tom got a new game from the last Lake Geneva Games Blind Auction titled Spike (2014).  I watched it played a couple of times and then got the chance to try it myself last week.  I got to play it with two players and then three players and found it to be just as fun both times.  It's a train game, so of course Tom needed to bid on it. 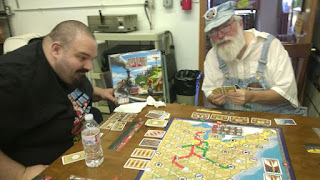 
It's the early 1900's and you are the owner of one of the fastest growing rail companies in the eastern USA.

In Spike, you expand your rail network as you connect cities in order to pick up and deliver more goods; complete contracts and routes to bring in money to modernize your train; upgrade your engines, tenders and railcars to transport the most freight; and build farther, transport more, and amass wealth on your way to become "King of the Rails". 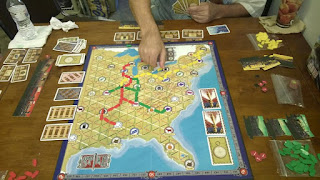 The rules are fairly simple and easy to learn.  Strategies can vary and I think this game presents enough ways to win that it is more than simply a race for victory points.  I'd like to try it with even more than three players but I suspect it will hold up just as well.  This one feels like a winner. 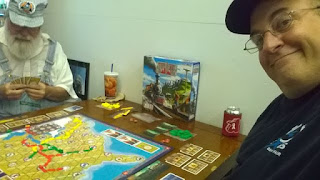