Tabletopper Friday - A Touch of Evil

Recently for a Open Boardgaming Thursday, Norm broke out A Touch of Evil: The Supernatural Game (2008).  This game can handle up to eight players or as few as two.  Five played on this day and I have played it before, myself, so I simply observed this time around. 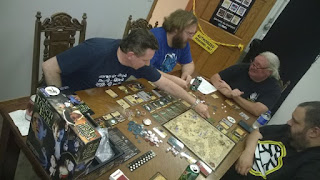 
"A Touch of Evil, The Supernatural Game" is a fast-paced game of fiendish creatures, dashing Heroes, and high-adventure.

Each player takes on the role of a unique monster-hunting Hero, racing against time to stop the forces of darkness from claiming another foothold in the world of man. Only by investigating the town and building your Hero’s strength can you hope to hunt down the Supernatural Villain to his Lair and defeat him in an epic Showdown. Players can race Competitively to be the first to defeat the Villain and save the town, or they can work together Cooperatively to defeat a much stronger Villain.

Featuring a gameboard map of Shadowbrook and its surrounding countryside, eight Heroes to choose from, and four different Supernatural Villains to hunt; each with its own host of unique Minions and powers to drastically change the game.  A Touch of Evil is designed to create an adventurous cinematic feel as the story and game unfolds.

So grab up your Wooden Stake, stuff some shot in that Musket, and hold onto your Tri-corn Hat; no one is safe from the creatures of the night and no one can be trusted…for inside everyone lies A Touch of Evil. 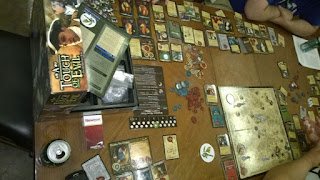 While the game says it is face-paced, in practice this game can bog down tremendously unless someone is overseeing the pacing.  The cinematic feel and race against time are utterly lost if this game grinds down.  Players who are prone to paralysis analysis can take this ninety minute game and turn it into a four to five hour slog if folks aren't careful.  It's not difficult to teach the basics and the finer points can be learned on the first turn or two, so folks should be off to the races quickly and prompted what options they have on their turn to ensure swift playing.  With that warning in mind, this can be a very fun game, so keep up the pace and have a blast. 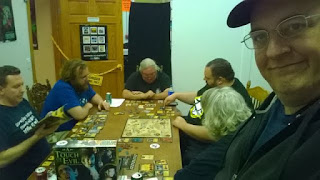