Along with the wargames I mentioned yesterday here, I managed to pick up a few older items at Half Price Books on recent trips.  A couple of days ago, I was surprised to find a copy of Waterdeep and the North (1987) by Ed Greenwood from TSR.  This copy was in plastic, though not shrinkwrap, and had the original map in great shape.  From Wikipedia: "Waterdeep and the North describes the region of northwestern Faerûn, known as 'The North', particularly its leading city and port, Waterdeep. (. . .) The book describes Waterdeep in detail, including its history, neighborhoods, defenses, sewers, guilds, political factions, noble families, and important personalities. The book includes seven adventure scenario suggestions. (. . .)Waterdeep and the North comprises a 64-page book and a large color map of the city, wrapped in a removable six-paneled gatefold cover. The outside gatefold contains a map of Waterdeep, the inside front cover has a map of the city's known sewers, and the inside back cover has diagrams of basic floorplans that might be found throughout the city." 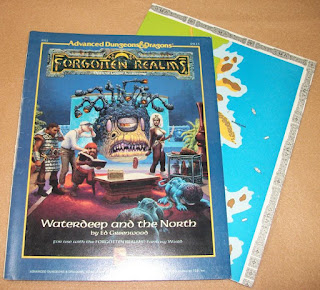 Also, on the same trip on Tuesday, I discovered a copy of the Celts Campaign Sourcebook (1992) from TSR.  It, too, came with the map and is in great shape.  A copy of Charlemagne's Paladins: Campaign Sourcebook was also on the shelf but didn't have the map so I passed it by.  Graeme Davis, who wrote the book, has a lot of neat freebies on his website that you can download in PDF format and utilize in your tabletop gaming here. 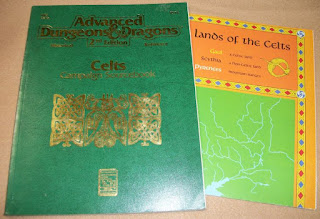 Finally, on a trip not so long ago, and because I hadn't found time to mention them in a blog previously, I also stumbled upon two of the supplements for Warhammer Historical wargaming system from Games Workshop: El Cid (2003) by James Morris and Spartacus (2004) by Simon Brown.  I'll need to find a copy of Warhammer Ancient Battles at some point to make full use of these supplements but I have enough on my plate right now to occupy me, I am sure. 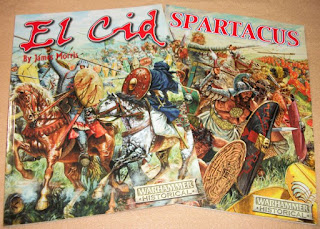