I finally got the chance to try out Dragon Rampant: Fantasy Wargaming Rules (2015) at Nexus Game Fair in Milwaukee last weekend.  Daniel Mersey designed this system for Osprey Publishing based off his own Lion Rampant rules which are for Medievals without the fantasy elements.  Kevin Cabai of the Historical Miniatures Gaming Society (HMGS Midwest) designed this scenario depicting a Tolkien-esque theme 15 years after the time of The Hobbit.  This guy always brings the goods! 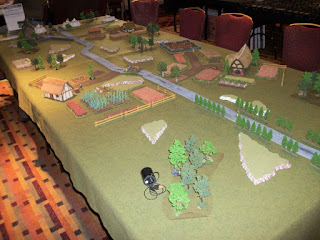 
Whether you're a nameless Dark Lord looking to conquer the known world, a Champion of Light holding out against the forces of evil or a Northern barbarian facing claimants to a stolen throne, Dragon Rampant allows you to bring those battles to the tabletop.

Developed from the popular Lion Rampant system, Dragon Rampant is a standalone wargame that recreates the great battles of Fantasy fiction. Scenarios, army lists, and full rules for magic and monsters give players the opportunity to command unruly orc warbands, raise armies of the undead, campaign across an antediluvian world as the warchief of a barbarian tribe, or exploit the power of mighty creatures and extraordinary sorcery.

An army usually consists of 6-8 units comprised of 6-12 individually based figures. These small units move and fight independently, assuming that they follow your orders rather than just doing their own thing. Command and control is just as important on the battlefield as the power of a troll chieftain or the magic of an archmage. 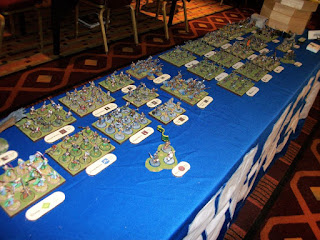 Essentially, Nain, cousin of Dane of Iro Mountain fame, is leading a wagon of gold and gems through some unincoprorated Middle Earth when beset by baddies in the form of orcs, goblins, a troll, and some evil men.  Fortunately, Nain has a lot of dwarves with him along with some good men, some elves, and a giant eagle.  The system is all about the high side of a d6 for hits and courage checks to prevent fleeing.  Kevin made some modifications to ensure this game was more epic, like limiting those courage checks and not making them snowball.  He turned this two-player game into a four- or five-player game, so more could play and there were plenty of figures to run.  Top marks from me on this scenario and the rules. 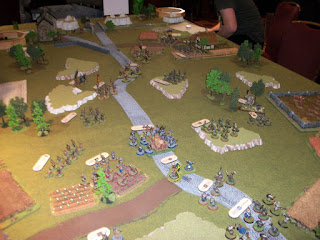