A quick and easy card game that we play locally from time to time is For Sale (1997).  As far as card games go, we don't play this as often as Love Letter or its variants but it might be in the top five. 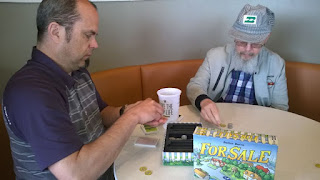 
For Sale is a quick, fun game nominally about buying and selling real estate. During the game's two distinct phases, players first bid for several buildings then, after all buildings have been bought, sell the buildings for the greatest profit possible.

The original Ravensburger/FX Schmid edition (1997/98) has slightly different rules than later English editions, and only 20 buildings instead of 30.

The Überplay 2005 Edition has new art, rules and card distribution changes, and it accommodates 3-6 players.

The rounding rule preferred by the designer Stefan Dorra is that players get back half of their bid rounded DOWN (not UP), as confirmed in correspondence with him here and here. A history of how the rounding rule has changed in different editions is documented here. 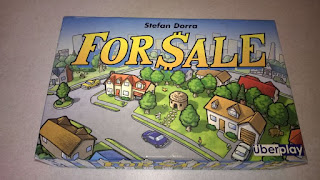 It has both bidding and hand-management aspects to it but there is an element of bluffing as well.  Table talk seems to be very big in this game and coaxing others to overbid is often a good strategy to implement.  There's a lot to be said for getting the highest value property but making sure to secure the middle values seems just as important. 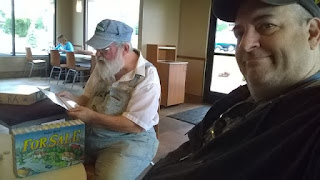