It was just about a year ago when Norm ran us through the Mall Madness scenario using Last Night on Earth: The Zombie Game (2007) and I blogged about it here.  We were pretty pleased with ourselves at the time because the cards just seemed to keep going our way.  Not so this last Lake Geneva Games gameday because we had our hats handed to us with our brains in them! 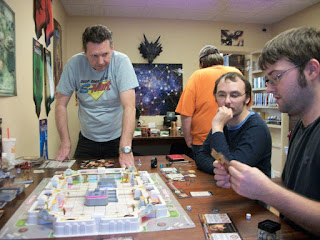 
Last Night on Earth, The Zombie Game is a survival horror board game that pits small-town Heroes head-to-head against a horde of Zombies. A team of four heroes is chosen by one set of players, and the Zombies are controlled by 1 or 2 players. Each hero has its own special abilities. The board is modular, which changes the layout of the town and start positions of each hero. The game comes with several scenarios, which include simple survival, rescue, or escape. Differing combinations of heroes, scenarios, and board configurations offer a lot of replayability.

A Hero deck and a Zombie deck deliver tactical bonuses to each side. Combat is resolved using 6-sided dice, modified by the weapon cards heroes may be equipped with. Many of the cards include zombie movie tropes to achieve a feel of playing out a horror movie. All the game art is photographic, enhancing the cinematic feel. The game also comes with a CD Soundtrack of original thematic music.

Each hero has its own plastic sculpted miniature. The game also has 14 zombies in two colors. Other objects and effects are represented by high-quality cardboard counters.

And the Last Night At The Mall: A Last Night On Earth/Mall Madness variant scenario can be downloaded through the link at Board Game Geek here. 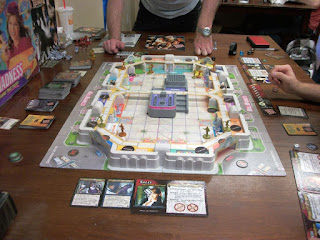 If you haven't played this variant, and can get your hands on an old Mall Madness game to facilitate it, I highly recommend it.  It's still a fun game, even when you lose (perhaps more so!) but we were short on time so we kinda ran a truncated version of it.  That may have favored the zombies a bit, or so I will claim until the next time we play! 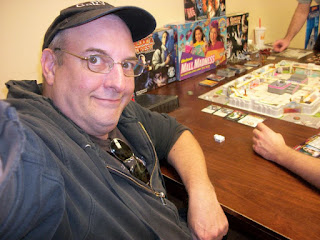