I got a chance to revisit Tiny Epic Galaxies (2015) not long after the first time I played it.  We also played two games consecutively, which I do like to do if it is a game I enjoy.  This is definitely one such game.  We played with three people, one who had tried it during the playtesting phase and the other who was new to the game (both solid gamers who learn quickly and are strong strategists). 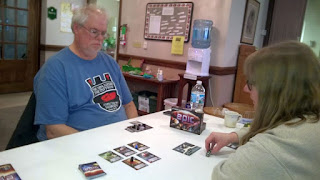 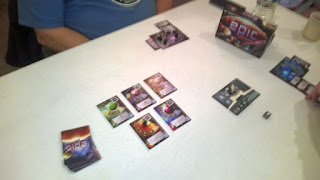 We didn't use the expansion for either game though it was available.  I'm glad of that because I had played the most of we three and still feel like the base game has plenty enough to offer.  If I play later with all experienced players or ever feel like the base game is becoming too familiar, I will definitely lobby to add the expansion into the mix.  As it is, there are still enough card combinations that the base game always has something new to offer during gameplay.  For example, out first game on this day yielded a planet selection and secret missions that prompted a lot of competitive play between while during the second game, the planets which started the game were often helpful to the landing player as well as others.  A decidedly different feel, despite still being a competitive game.  I look forward to paying this one a whole lot more. 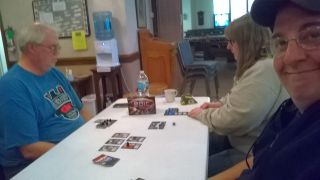