We recently got the chance to revisit Alien Frontiers (2010).  Once more, we played with five players and utilized some expansions, notably more Alien Tech Cards as well as hidden Agendas.  I think both of these add a great deal to the game.  As per yesterday's blog about Tiny Epic Galaxies, we played Alien Frontiers twice in succession, so the two new players were well up to speed with the three semi-veterans half into the first time through.  The second game came down to a three-way tie with the first tiebreaker elimination one contender and a second tie breaker needed to edge the winner into first place by a single point.  Quite exciting! 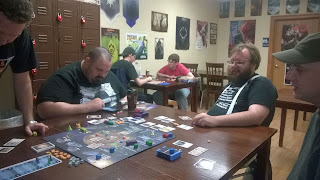 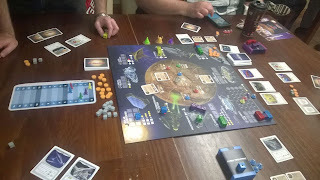 Our group finds this game to be very flexible provided folks understand that the Alien Tech cards are integrated into whatever strategy is chosen.  This is also a game where anyone can win regardless of slow starts or difficult rolls or turns during the game.  If a strategy doesn't unfold as planed or someone else's strategy is thwarting the one chosen, another strategy can be chosen and exploited.  I've heard the argument that some bad dice rolling can doom a strategy but, from what I have seen, some flexibility and adjustments can change the game considerably.  Even in games where I was not ultimately the winner, I've always felt that there was a way for me to win each game I have played until the final round.  It seems to come down to watching who is within two colonies of triggering the end of the game and being ready to make a move of your own. 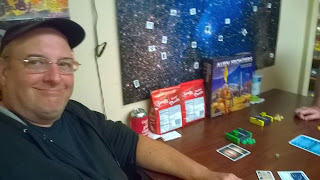