Late last week, we busted out Firefly (2013) with all of the expansions, courtesy of Norm's collection.  The table was well full, to say the least.  The smaller expansion add a bit more to the game, like additional ship choices and some equipment cards: Artful Dodger (2013), Breakin' Atmo (2013), Jetwash (2015), and Esmeralda (2015).  I do recommend adding all of these to your game when the base game begins to become familiar.  But you definitely need to pick up both Blue Sun (2014) and Kalidasa (2015) if you're a fan of the show and want to make the universe feel a lot more complete, not to mention expand the options for play by a ton. 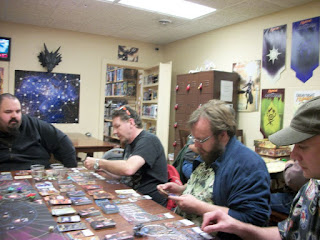 The description from Board Game Geek for the base game is as follows:


Players begin with a ship, and travel from planet to planet, hiring crew, purchasing ship upgrades, and picking up cargo to deliver (jobs) all in the form of cards. Some crew and cargo are illegal, and can be confiscated if your ship is boarded by an alliance vessel. Travelling from planet to planet requires turning over "full burn" cards, one for each space moved. Most do nothing, but you can also encounter an Alliance ship, have a breakdown, or even run into Reavers. Completing jobs gets you cash. First player to complete the story goals wins.

Game description from the publisher:


In Firefly: The Game – based on the popular Firefly television series created by Joss Whedon – players captain their own Firefly-class transport ship, traveling the 'Verse with a handpicked crew of fighters, mechanics and other travelers. As a captain desperate for work, players are compelled to take on any job — so long as it pays. Double-dealing employers, heavy-handed Alliance patrols, and marauding Reavers are all in a day's work for a ship's captain at the edge of the 'Verse. Firefly: The Game is a high-end thematic tabletop boardgame from Gale Force Nine (GF9) and the first in a series of tabletop hobby board games and miniatures games from GF9 set in the Firefly Universe. 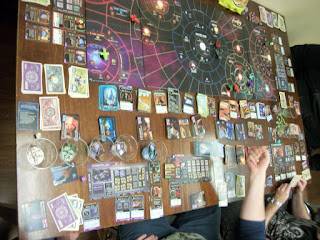 We tried our own variant based on the amount of time we had to play and found it worked well.  We used one of the in-game cards that had us put Reaver and Alliance markers on all planets in their spheres but we also set and end tie for the game, deciding we would simply sell off all of our stuff at the end adding up the totals.  The twist would be that missions will have helped during play, in that they pay off when completed, but would also add to the total in the end game, in the form of the value in the lower right of the card.  Same thing for bounties.  Everyone started with 12K credits, bought their starting ship and drives, but also got to sell those and all gear and crew at the end.  Once we were done, we figured out the the difference between first place and last was basically the value of having completed one large job, so it really was close. 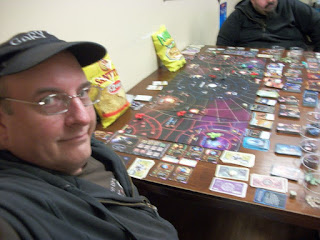