It only took a few minor changes to the standard game of Love Letter (2012) to make Love Letter: The Hobbit – The Battle of the Five Armies (2015) but they do make for a new game experience.  They added a "0" numbered card designated as The Ring, renamed the rest of the cards for the various franchise characters, and changed what a couple do in minor ways.  The two Baron cards were replaced by Legolas and Tauriel and while the former works the same way, the latter has the opposite effect whereby the player with the higher card is out of the round. 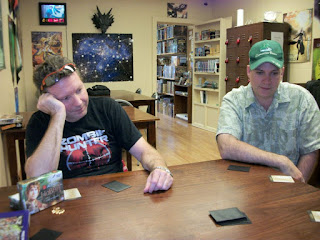 The description from Board game Geek is as follows:


Love Letter: The Hobbit – The Battle of the Five Armies is a game of risk, deduction, and luck for 2–4 players based on the original Love Letter game by Seiji Kanai. The deck consists of 17 cards, with the Arkenstone being valued #8, Bilbo Baggins #7, and so on down to The One Ring at #0.

In each round, each player starts with only one card in hand; one card is removed from play. On a turn, you draw one card, and play one card, using the power on that card to expose others and (possibly) knock them out of the round. If you're the final player active in the round or the player with the highest card when the deck runs out, then you score a point. In LL: The Hobbit, The One Ring does nothing during play, but it counts as a #7 when the game ends, possibly leading to a tie should someone else hold Bilbo.

In addition to the one extra card, LL: The Hobbit differs from the original game in that the Baron (#3) is represented by two separate cards: Tauriel and Legolas. When you use an elf's power to compare cards, Tauriel knocks out the player with the higher valued card while Legolas targets the lower valued card. (This change isn't in the German edition, where Legolas and Tauriel have the same text.)

Whoever first wins 4-7 rounds, with the number dependent on the number of players, wins the game! 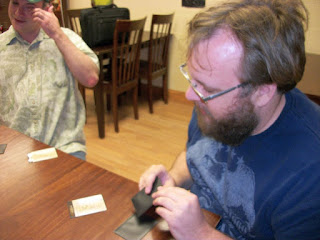 We warmed up by playing a game of regular Love Letter before this, and I think that helped the two players who had only played the original once or not at all before jumping into the Hobbit version.  They both played quite well, but as roleplayers and regular boardgamers with bluffing game experience, this probably wasn't surprising.  I think that, as with Love Letter, any bluffing game is going to come down to how well you do at bluffing games in general.  I know we had a whole lot of fun, and it doesn't cost much to find out.  Pick it up, try it out, and if you don't lie it, wrap it up as a gift to another gamer. 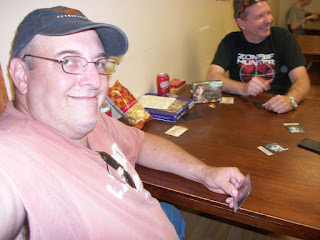