Stopping out at the Gaming Hooppla last weekend, I got the chance to play a game of Istanbul (2014) along with the Istanbul: Kebab Shop Mini Expansion (2014) with Tom Wham.  There was a small crowd at the Hoopla on Friday evening and I stopped out again on Sunday to about the same, though I was told they were hopping (for a mini-Hoopla) on Saturday.  It's a fun event and I hope I can make it to the full Gaming Hoopla in the spring up in Milwaukee.  One of the things I like about Istanbul, it's always a tight game.  I like the addition of the Kebab Shop and the options it adds to play. 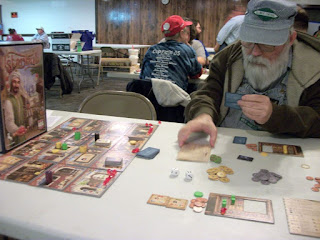 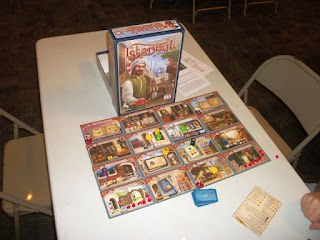 The description of the expansion is as follows:


An official expansion for the game Istanbul, published in the European games magazine Spielbox, issue 3/14.

The Kebab Shop replaces the Fountain from the original game.

For placing the Kebab Shop, the same rules as for the Fountain apply. As an alternative, you may pay 2 lira to move your family member from any free space (although not from the police station) to perform an action at another space of your choice.

The Kebab Shop has to be placed as one of the inner spaces of the bazaar.

Note: this expansion is produced on card stock rather than the thick cardboard used for the original game tiles. 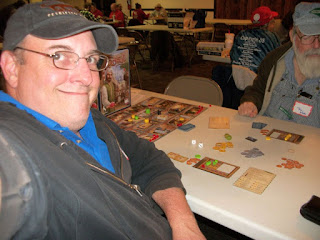 I don't think I used the Kebab Shop as much as I could have.  There was chance to have my Family Member go on a market run for me that might have saved a couple steps off my game.  In Istanbul, a couple of steps can make all the difference.