Most of the games of Istanbul (2014) I've played have been two player games.  My first was with five, but since then it's only been one on one except for one three player game somewhere down the line.  While I know that it can be quite a different challenge with more people, I really like the way it plays as a two player game. 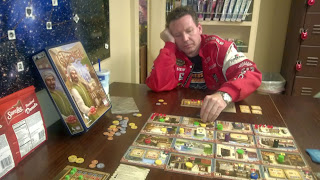 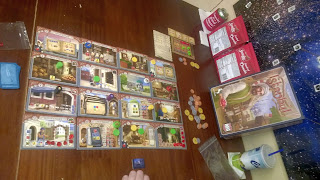 I've said this in a previous blog post but it definitely pays to plan far enough ahead to avoid needing the fountain.  Getting Mosque Tiles then the Cart Upgrades might be the two biggest priorities.  Their importance is two-fold, the action benefits as well as the ruby at each location.  A couple of trips to the markets is often enough to allow for purchasing the other three rubies (six required in a two player game).  However, you do need to plan those actions out along with visits to the regular markets for goods and it can't hurt to grab a bonus card or two.  Avoid paying the fee for running into other merchants.  In fact, all encounters come with a fee, so I don't go out of my way for them like some folks might. 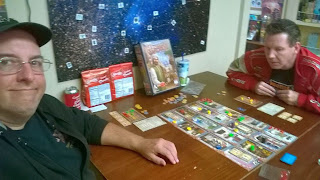