Guildhall (2012) has been out for a few years now and I've played a handful of times.  It's a fine looking game and can move very quickly allowing two or four players to finish it in less than an hour.  There are six types of cards and each comes in five colors.  Collecting a type in each color allows you to bank that set and trade it (and possibly a second) for victory points and a bonus action.  You can also collect coins for victory points but that is slow-going and better used to supplement the VP cards. 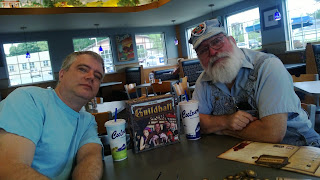 
Progress! That's what these Dark Ages need, someone with a little get-up-and-go. You've been a serf in this one-pig town long enough, and it's time to shake things up. You've opened a guildhall for like-minded professionals from all over Europe to work together, build their trades, and get some economic stability.

Now if only everybody else didn't have the same idea...

Well, you'll just have to do it faster than those other guys! Gather professionals into chapters, and use their combined might to reach for victory. Collect complete color sets of professions (all five colors of Trader, for instance), which you use to buy victory points (VP). The first player to gain 20 VP on her turn wins.

In Guildhall, each profession grants you special abilities, and these abilities grow stronger the more of the set that you complete. When you cash in the set for victory points, however, you lose the ability until you can build it up again. Which professions are worth risking VP to keep? 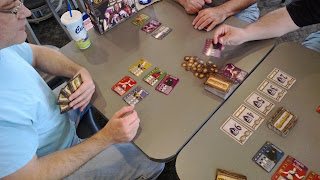 Guildhall (2012) is a fun card game that moves quickly once you understand the mechanics.  The iconography might feel a bit confusing at first since there are some subtle differences in the symbols but that doesn't take too long to clear up and master.  I'd recommend at least three players and four is better with this game, as it can be quite cutthroat and spreading that joy among more players can ease the pain engendered. 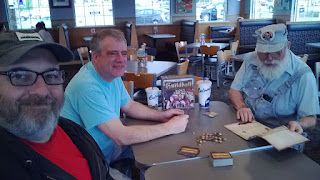