It was recommended that every person who purchased the original Dungeons & Dragons boxed set of booklets own a copy of Outdoor Survival (1972).  It's boardgame map was meant to be used as a de facto outdoor setting map until a GM could fashion his own campaign setting.  It worked well enough and the idea of the "hex crawl" where players moved their characters from hex to hex on a top-down map while a GM rolled for random encounters was virtually born from this map used with (O)D&D. 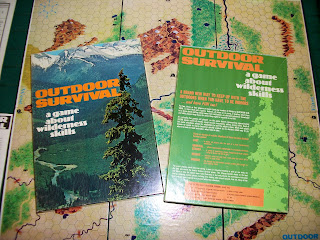 Not long ago, a gamer-friend and myself broke out the old (O)D&D rules and my Outdoor Survival map to kill a short afternoon.  We rolled up a dozen low-level characters and controlled two each as we began to haphazardly explore the map.  I had not gamed this way since 1974 when first playing, as my first-ever GM at that time was quick to put together a setting, as was I for when we switched off who ran the game.  It was every bit as brutal as I remembered it.  Granted, we mostly tried to evade and get closer to civilized areas but even then we burned through our pregens faster than a Magic-User uses up spells and potions.  Mind you we were not giving ourselves much leeway, since we were GMing ourselves, essentially.  As I recall, when we first played way back in the day we were fairly tough on one another as well.  A player would go through a lot of characters before one managed to survive to get a foothold in a campaign world.  Yeah, I know: walking to school, snow, uphill both ways, etc.  It was certainly a different game than most I see played nowadays. 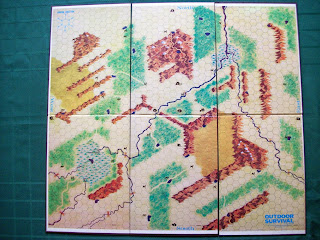 I mean that when I say, "a different game."  Too often I hear or read people suggesting that something is a matter of "playstyle."  I'm not sure how this word gained traction but it often gets used to describe not just different ways of playing with a particular set of rules but rather which additions to the game are being used.  A "Sandbox" game, for instance, is essentially what is described above with the possible addition of some nouns (people, places, and things) fleshed out in advance by a GM without regard to where the player character might decide to go.  If something is hidden, they might not find it even if they are looking.  A campaign setting wasn't static, mind you.  It just existed, in theory, whether the PCs were there or not.  If the PCs interacted with some portion of a campaign setting, that portion reacted and consequences were handled by the GM, and described to the player within the scope of their knowledge and senses.  How far a ripple depending on the size of the impact and the weight of the consequences.  This was the essence of how a roleplaying game worked. 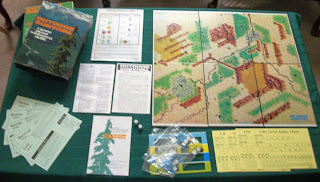 In a follow up post, I will discuss the addition of game elements that altered the game in how it was played and how the game itself fundamentally altered based on those additions.  I'll also look more closely at a better example of "styles of play" within a roelplaying game.  In the meantime, think of it this way.  Below is a video of how to play Outdoor Survival (1972).  If I use the boardgame map to play (O)D&D that's not me exhibiting a different playstyle.  I'm playing a whole different game.