War of the Ring - Second Edition (2012) is a fun way to play out the events of J.R.R. Tolkien's Lord of the Rings in a boardgame/wargame format.  It's really two parallel games being played out in tandem, both of the concurrent games can present the opportunity for either player side to achieve victory of the whole.  One track is essentially a wargame where the "Free Peoples" players (handling Gondor, Rohan, Elves, Dwarves, and the Men of the North) only needs 40% of the victory points as the "Shadow" player (handling Sauron, Saruman, and their allies).  The other track is essentially a boardgame where the Free Peoples' player has to move the Ring of Power to Mount Doom and destroy it while the Shadow player searches for the Ring.  In most ways it is like SPI's War of the Ring (1977) though cosmetically it appears less of a wargame in the modern versions.  So, too, the first edition of the modern game, War of the Ring (2004), is nearly the same as the second edition with, apparently, some adjustments of which are detailed on Board Game Geek (in too many places for me to innumerate). 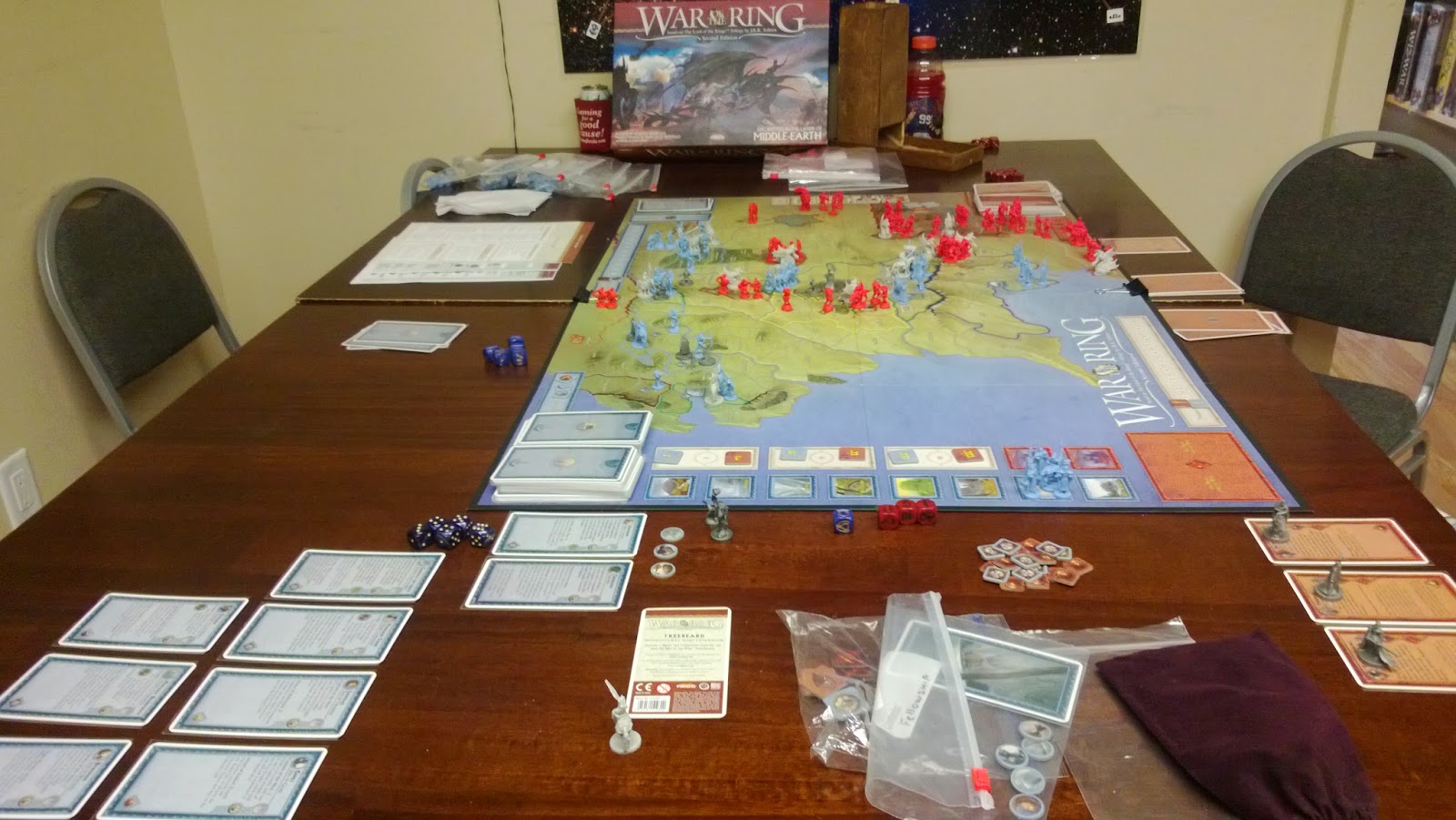 The description (for all three versions, essentially) on Board Game Geek is as follows:


In War of the Ring, one player takes control of the Free Peoples (FP), the other player controls Shadow Armies (SA). Initially, the Free People Nations are reluctant to take arms against Sauron, so they must be attacked by Sauron or persuaded by Gandalf or other Companions, before they start to fight properly: this is represented by the Political Track, which shows if a Nation is ready to fight in the War of the Ring or not.

The game can be won by a military victory, if Sauron conquers a certain number of Free People cities and strongholds or vice versa. But the true hope of the Free Peoples lies with the quest of the Ringbearer: while the armies clash across Middle Earth, the Fellowship of the Ring is trying to get secretly to Mount Doom to destroy the One Ring. Sauron is not aware of the real intention of his enemies but is looking across Middle Earth for the precious Ring, so that the Fellowship is going to face numerous dangers, represented by the rules of The Hunt for the Ring. But the Companions can spur the Free Peoples to the fight against Sauron, so the Free People player must balance the need to protect the Ringbearer from harm, against the attempt to raise a proper defense against the armies of the Shadow, so that they do not overrun Middle Earth before the Ringbearer completes his quest.

Each game turn revolves around the roll of Action Dice: each die corresponds to an action that a player can do during a turn. Depending on the face rolled on each die, different actions are possible (moving armies, characters, recruiting troops, advancing a Political Track).

Action dice can also be used to draw or play Event Cards. Event Cards are played to represent specific events from the story (or events which could possibly have happened) which cannot be portrayed through normal game-play. Each Event Card can also create an unexpected turn in the game, allowing special actions or altering the course of a battle.

When my buddy Wayne mentioned he was itching to play, I also became anxious to try out this second edition.  I had played the 1977 version years ago but multiple times and even tried the first edition once or twice around when it first came out.  I hadn't played this 2012 version and, with the Battle of Five Armies game coming out, I was in the mood to give this one a go. 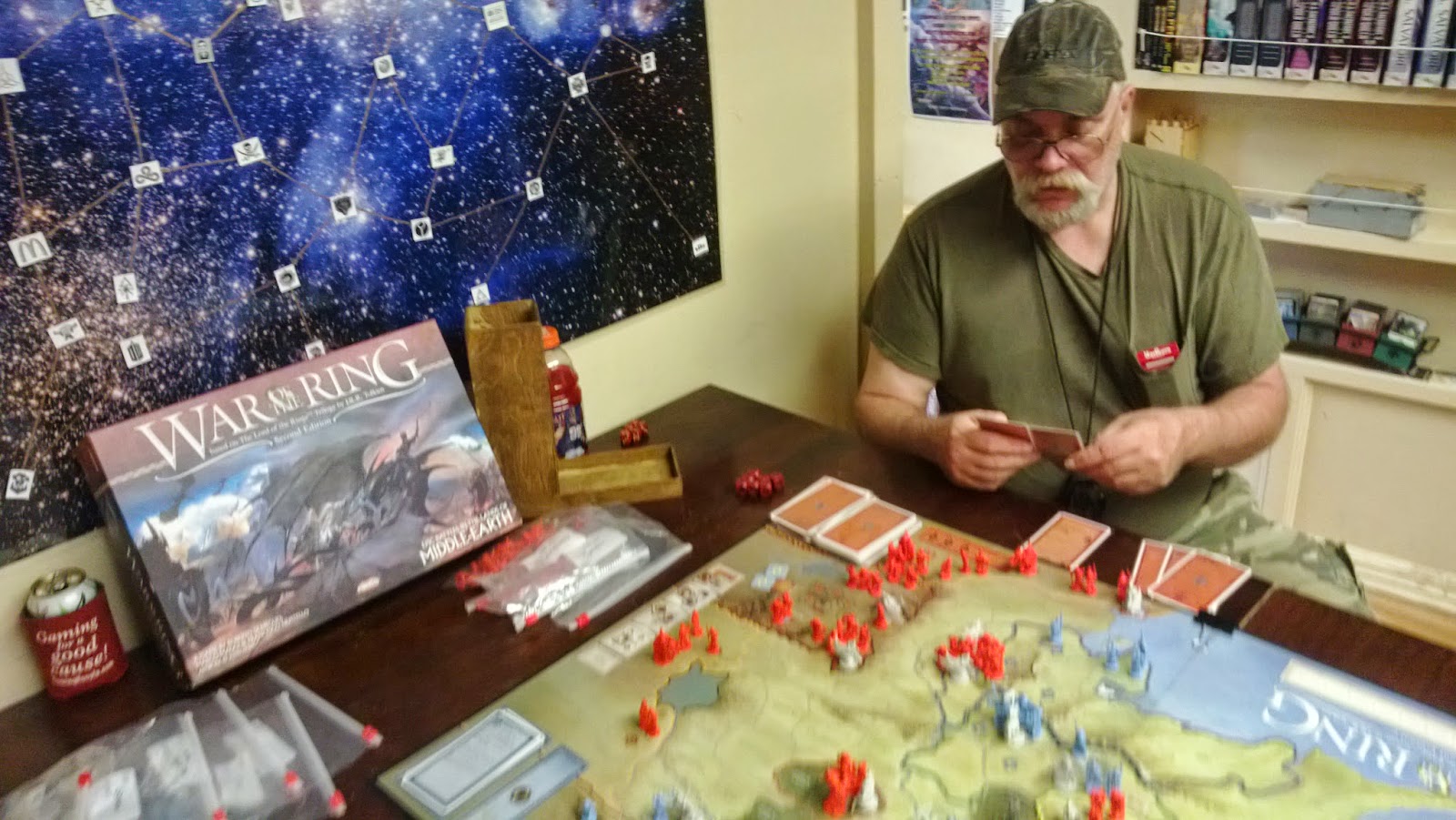 Although I didn't make this intention known prior to the game, I opted to play this almost entirely as a wargame.  While I would make prodigious use of the event cards to move around companions, I would be doing so in regard to utilizing them as leaders for troop movement and waging war.  Muster dice were mainly used to push the Elves and the Men of the North toward war.  I spent a couple of dice early on to add Elven Cloaks and Elven Rope to the Hunt Tiles that would be added to the bag should the Fellowship reach Mount Doom but this was mainly to cycle through the deck and find more useful cards for waging war and to keep up the ruse a bit longer that I might move the Fellowship at some point.  I was lucky to bring in Treebeard early, once a newly minted Gandalf the White (accompanied by Pippin) made it to Fangorn on the second turn.  Legolas was moved swiftly to the Woodland Realm in the first couple turns after that first thinning of the Fellowship. 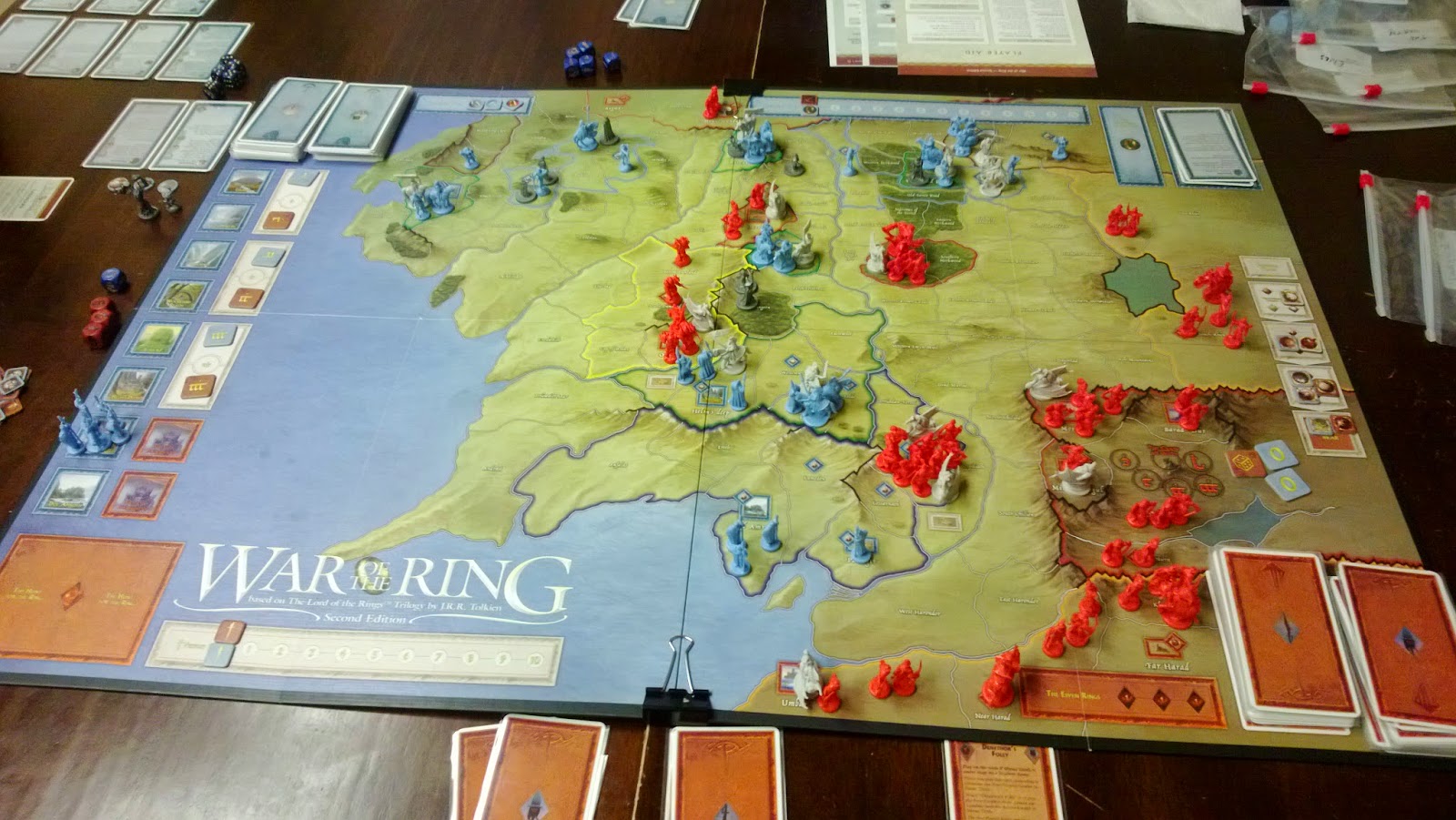 On turns three and four, I gutted the rest of the Fellowship and moved Strider, Boromir, and Merry west to gather the troops from the Shire, Grey Havens, and the North Downs.  Gimli also moved west to join back up with Legolas as he moved south with Elves and the troops from Dale.  The Fellowship now consisted of Frodo, Sam, and Gollum, never moved an inch from Rivendell, and stayed hidden.  I should mention that there was a brief moment at the start of the game when I considered ways to bring in the Dwarves on some level but I abandoned those ideas right away.  They simply have too far to move on the map and also on the political track to include them in an aggressive wargame strategy for the Free Peoples.  There was never any thought of moving Strider south to position him to become Aragorn. 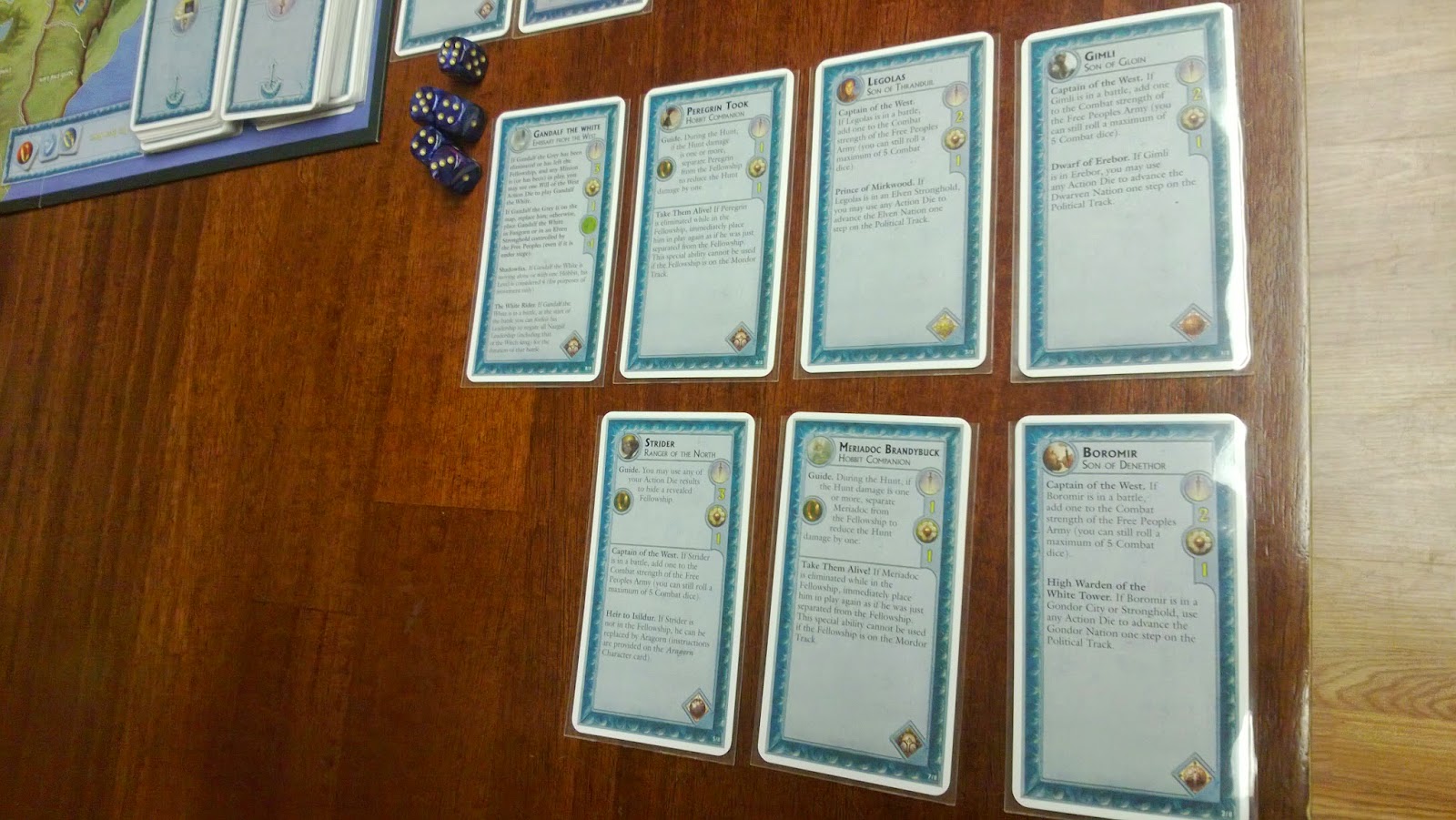 Soon, I joined Gandalf and Pippin with the Elves of Lorien, then moved them east to attack Dol Guldur.  Wayne had used a Moria Balrog card to extend the reach of Moria's threat to battles within two spaces of Moria, so I danced eastward around Dol Guldur a bit more than was prudent but was able to use that time to finish bringing the Men of the North "To War" which allowed me to strengthen my assault in southern Mirkwood.  Dol Guldur fell quickly since most of my cards could be used for battle and to limit losses, plus my pile of leaders allowed me to battle continuously against the besieged forces there rather than needing to drag it out.  With half my victory points acquired, the Shadow Armies were on their heels. 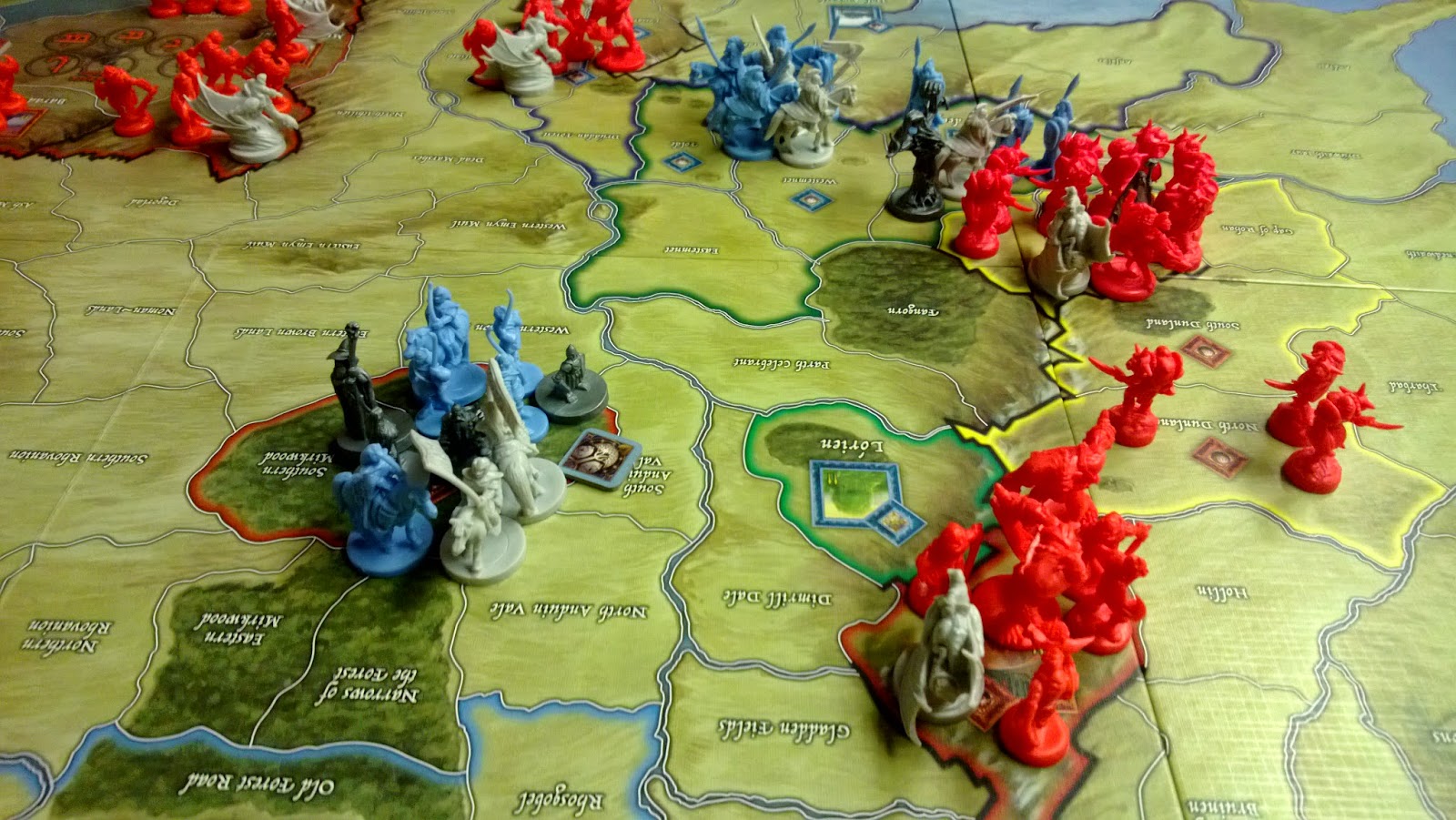 Isengard was never going to truly be a target but needed to be under threat if only to get them to slash out and help move Rohan on the political track.  I also needed the threat to Isengard to keep any of those troops from moving northward.  Moving Treebeard, who can move when companions move, down on that border drew the attack from Isengard and meant I only needed one Muster die to push them to the "At War" box.  The Shadow Armies had spent most of the early turns mustering in Mordor and Isengard, and had wasted some dice in the Hunt Box where I had never placed a die since the Fellowship never moved.  Wayne had also moved on and besieged Minas Tirith but didn't finish them off, though he had played the Denethor card which, IIRC, knocked off the only leader in the citadel.  Wayne also played a fair number of dice and cards bringing in his minions and giving him future advantages should the game go for much longer than it did. 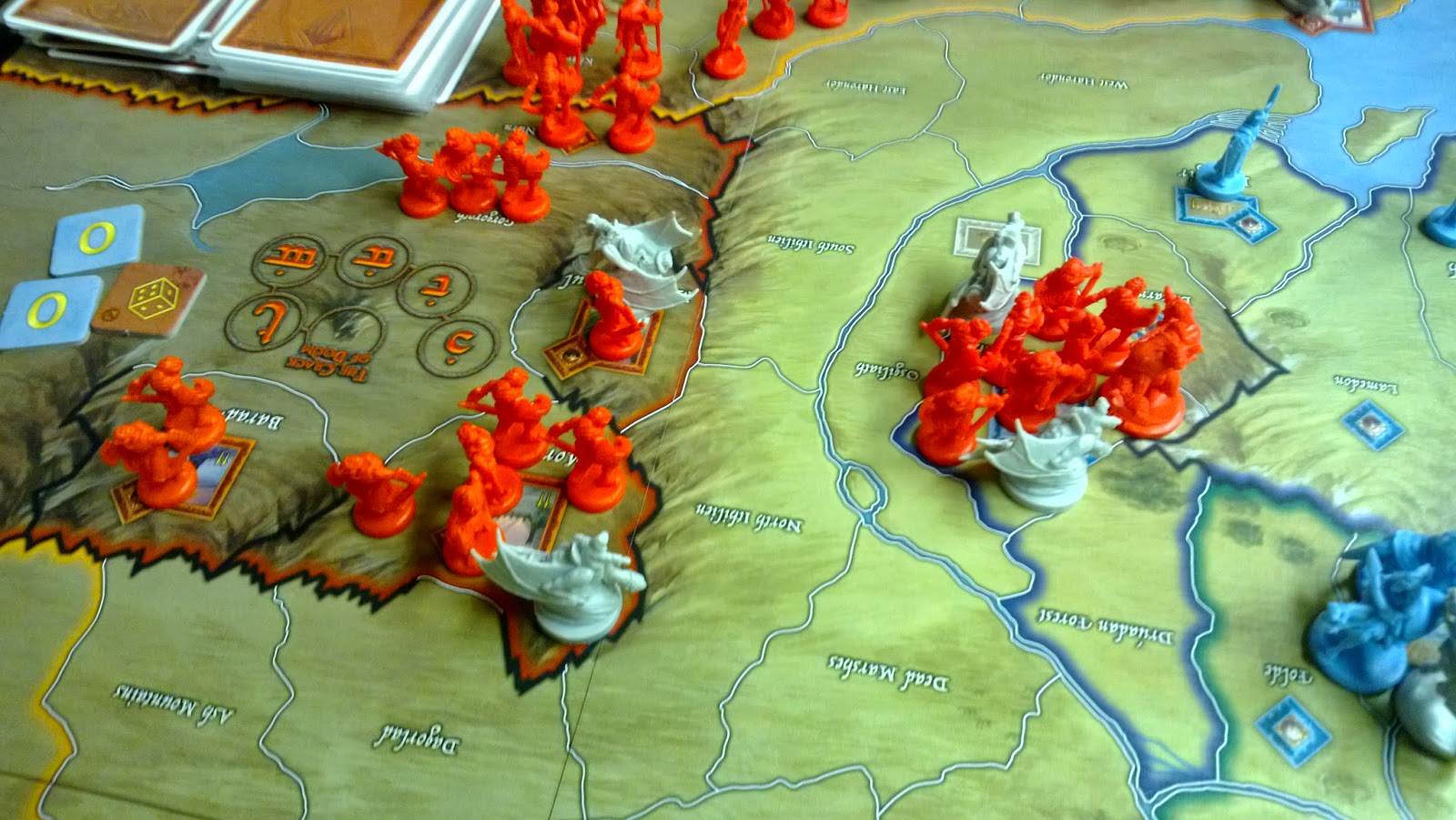 Though I was fairly certain I could get at Mount Gundabad and snatch up the additional two points I needed for victory, I feared that holding them until the end of a turn with all of the dice Wayne now had would be tough.  If he countered and took bad either place, it would also shift me to my heels and mean the undeveloped Fellowship side of the game would be at a huge disadvantage.  I would have been spending the rest of the game defending place after place and watching them fall to the ever-increasing numbers of enemy.  However, I still needed to keep the Shadow Armies from moving north from Isengard and Moria directly on Rivendell.  I chose to abandon Dol Guldur and plant Gandalf's army in northern Rohan and move the forces accumlated in Edoras up to join them.  I figured if Shadow Armies moved to retake Dol Guldur from Moria (which they did), I could move north and retake it with the enlarged force. 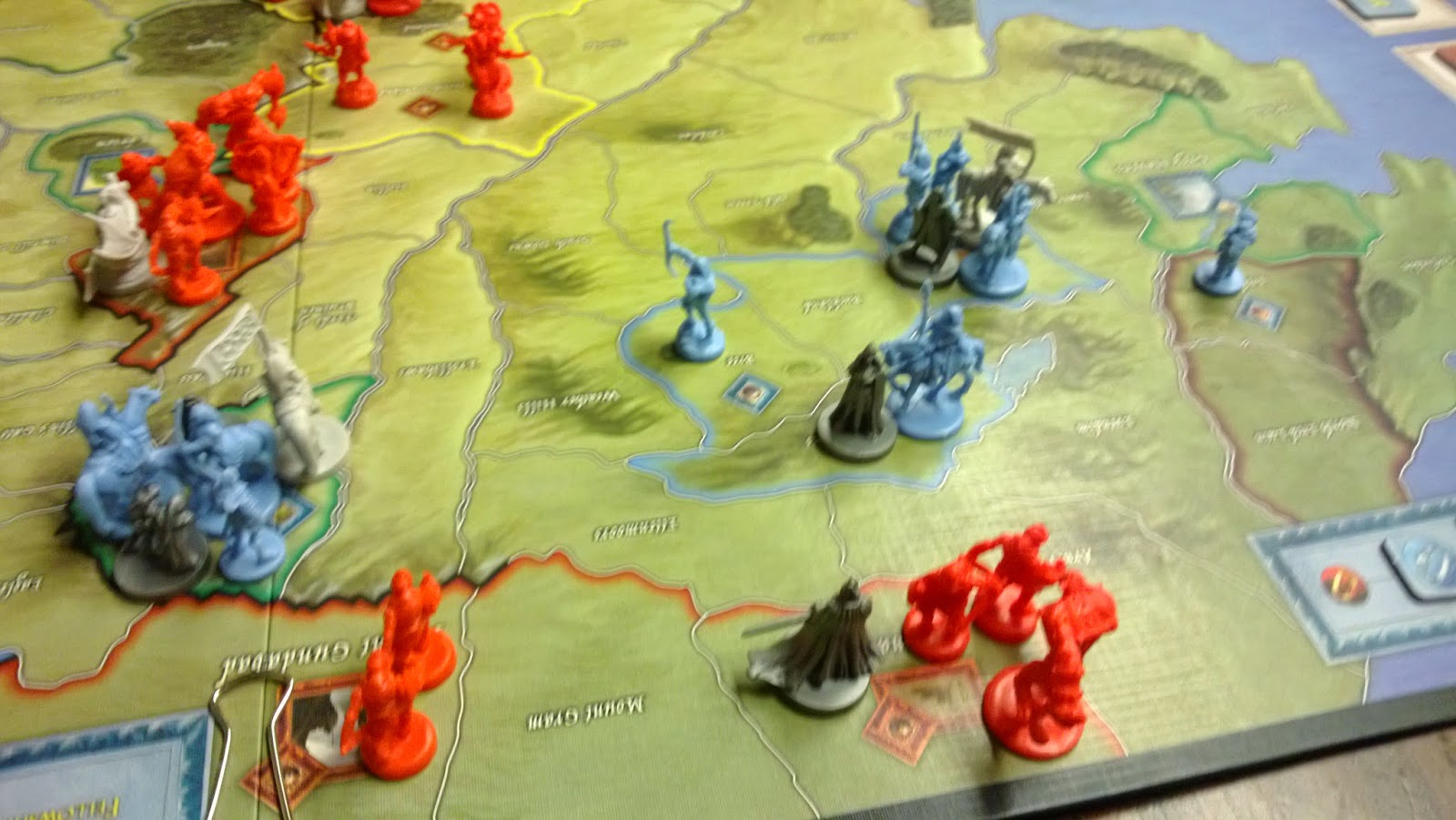 My army in the north now made its move.  These troops feinted toward Angmar but then interposed itself between Angmar from Mount Gundabad and then laid siege to the two-point stronghold.  At only one victory point, Angmar was never really a consideration and the feint didn't accomplish much beyond distraction from my original plan to take both Mount Gundabad and Dol Guldur.  I used up a couple of Elven Rings to make this happen but Wayne was using the rings just as quickly to respond to get his armies moved around, particularly to build up the siege on Minas Tirith to ensure it would not become a Pyrrhic victory.  Leaving some troops behind in Moria so that that two-point stronghold wasn't abandoned, he also used up resources to retake Dol Guldur lest it go poorly for him at Mount Gundabad (as it did) and he see the game come to an end. 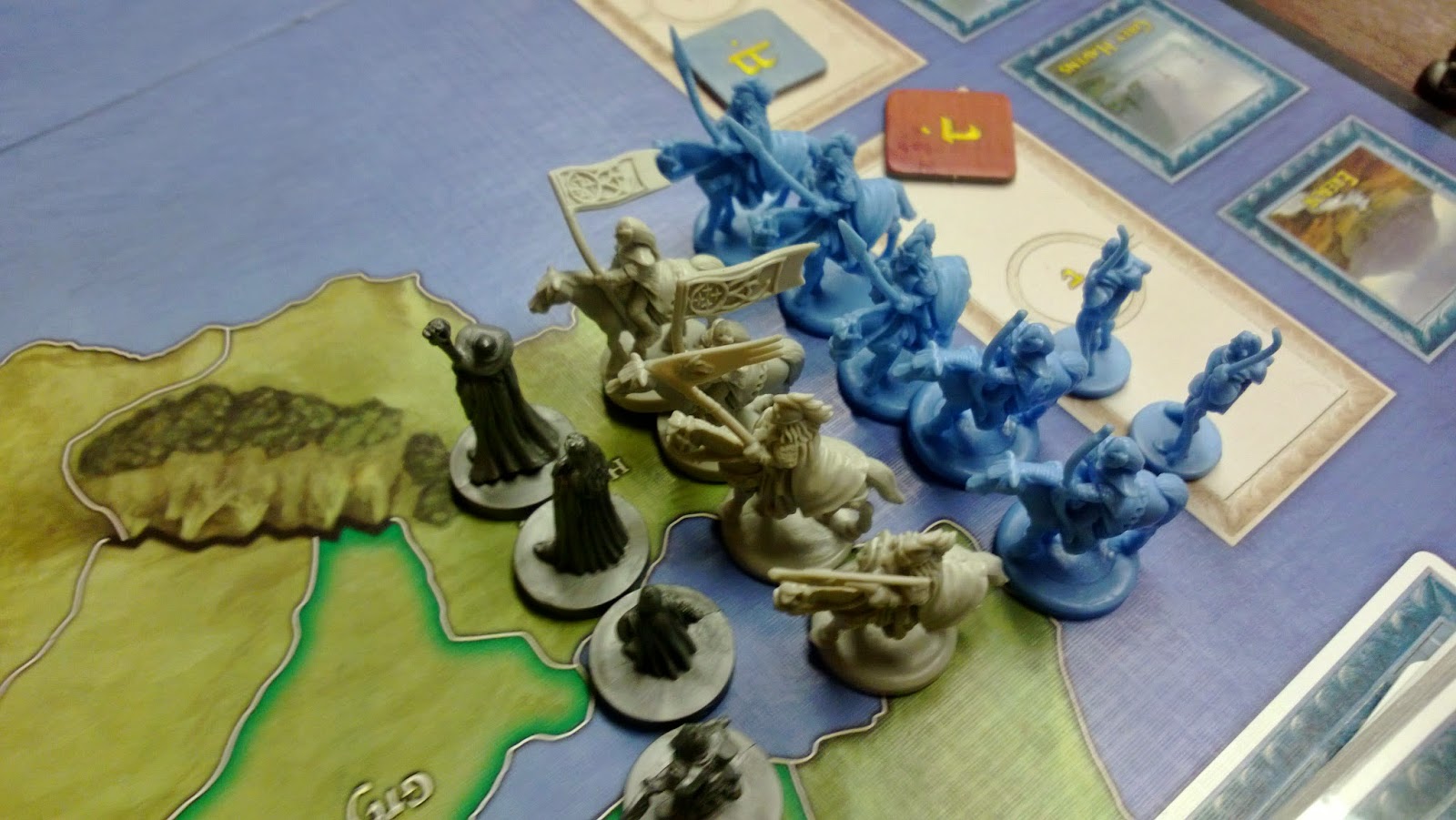 Then I drew the card that would allow me to move an army from Rohan to a space adjacent to Minas Tirith if it was under siege, which it still was.  It was a fresh turn and my dice were in good shape to take advantage of the draw.  Wayne had thrown four out of eight musters and had used up the Elven Rings responding in the north and retaking Dol Guldur.  Rather than spend two turns trying to take Dol Guldur again, I saw that Minis Morgul was open and gambled on committing my huge southern army on a card-move to Osgiliath.  Rather than allow me to join my besieged Gondorians from Minas Tirith with the big army should I attempt to lift the siege, he attacked me in Osgiliath.  I played a battle card to mitigate losses then retreated east.  With my remaining die, I moved into the open Minas Morgul.  The remaining Shadow dice, being four Musters, left him with no way to dislodge me before the end of the turn. 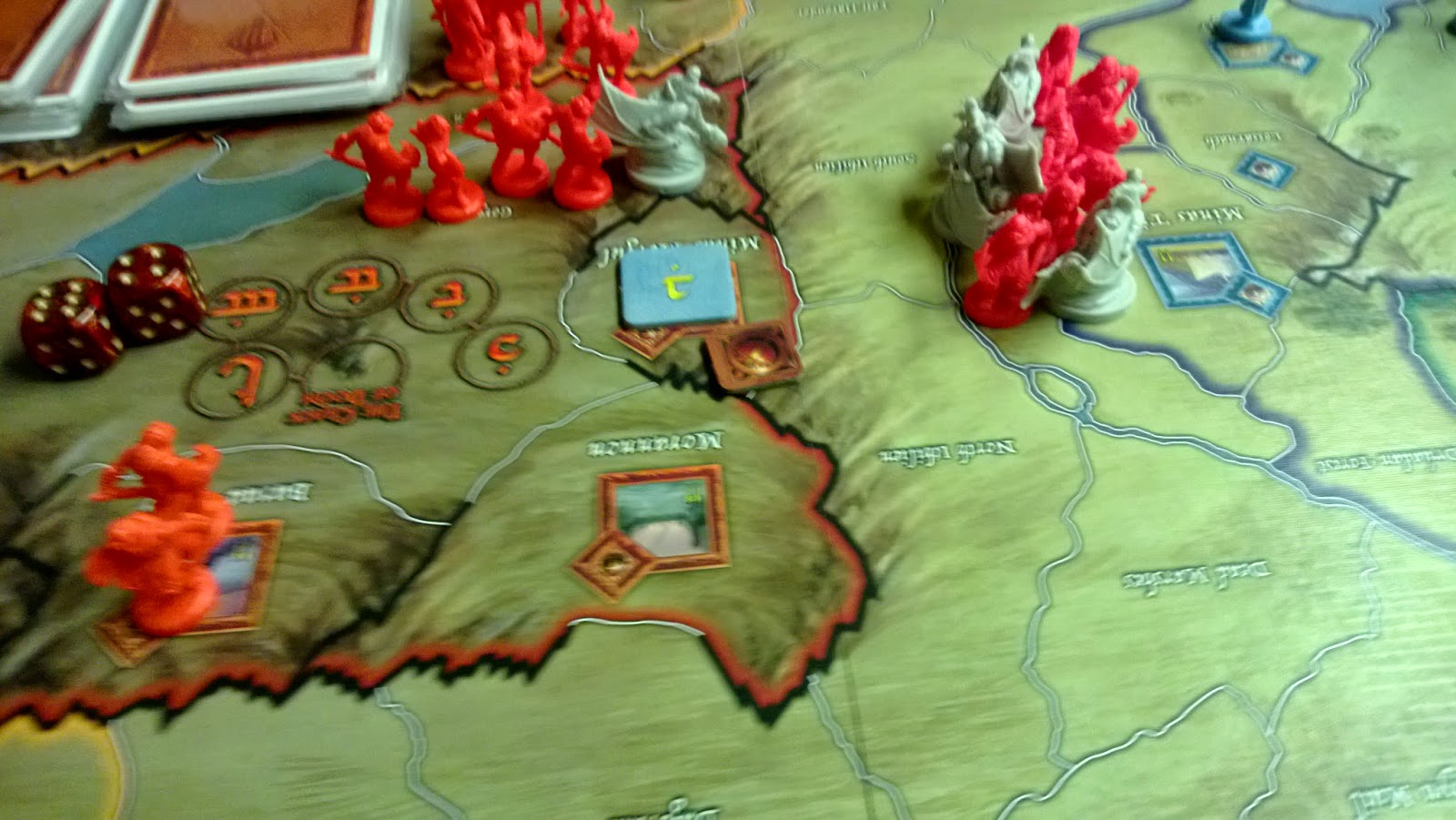 I wouldn't say there wasn't some fortune in the cards, though I played toward that by cycling through them as often as I could.  Further, I wouldn't say the dice weren't helpful and favorable, though I maximized how I used them with the help of the Elven Rings and made my final move when the Shadow dice left little chance to respond.  But I also wouldn't chalk this up to a huge amount of luck and ideal conditions for a Free Peoples wargame victory.  On the flip side, I think unless the Shadow Armies player makes early efforts to build up in the north and takes more time before attacking Minas Tirith, the options for a Free Peoples wargame victory are definitely in the offing any time this game is played. 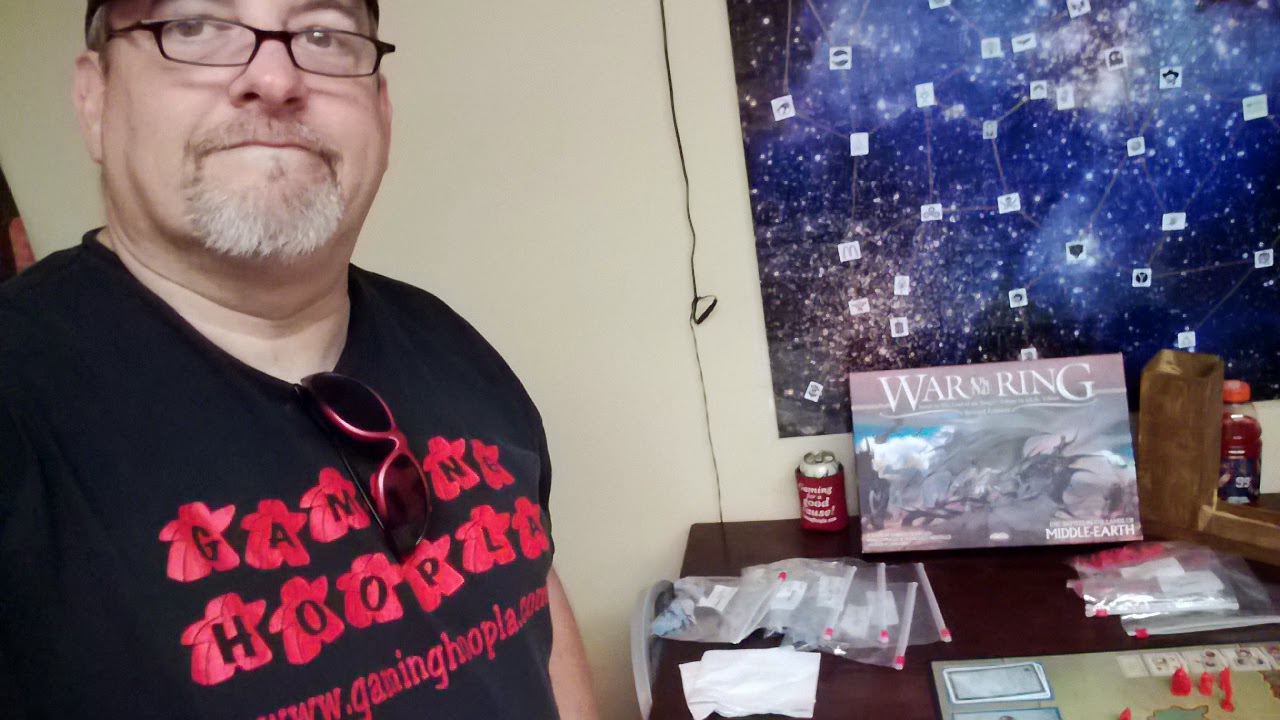