A recent post on oldschoolfrp.tumblr.com featured an advertisement from TSRHobbies, Inc. for their set of Dragon Dice, a set of polyhedrals with a crayon for coloring in the numbers.  It reminded me of the Dragon Dice (1995) game, similar in name only, designed for TSR by Lester Smith, now of Popcorn Press (his own imprint/company). 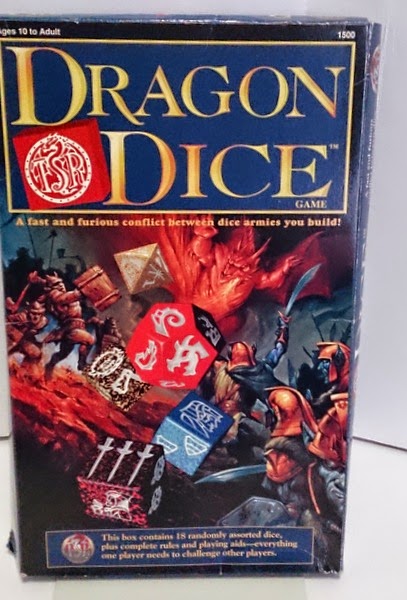 This description from Board Game Geek:


Players use colorful dice to represent armies of different fantasy races which battle to control essential terrain in this fast-rolling game. Any number of players can join the struggle, although it's designed as a multiplayer game. The first player to capture two terrains immediately wins the game, or you may try to obliterate your opponent's dice. Spells and layered strategies benefit certain races as you try to control the odds in this dynamic game full of surprises!

Interestingly, a group called the Windy City Rollers gets together regularly (and has for years) at Games Plus in Mount Prospect, IL, to play Dragon Dice.  Their next meeting is at the store at 6 pm on September 27th (as noted here if you scroll down).  Roll well!