Systems Saturday - Isle of Skye: From Chieftain to King (2015)

There's been a bit of play happening recently of Isle of Skye: From Chieftain to King (2015).  This is a clever little game with fast play and agile strategies.  It's largely about tile placement and recognizing when best to do so based on a number of random victory conditions presented at the beginning of each game. 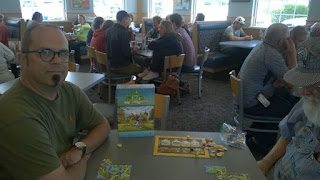 
Isle of Skye is one of the most beautiful places in the world, with soft sand beaches, gently sloping hills, and impressive mountains. The landscape of Isle of Skye is breathtaking and fascinates everyone.

In the tile-laying game Isle of Skye: From Chieftain to King, 2-5 players are chieftains of famous clans and want to build their kingdoms to score as many points as possible — but in each game only four of the sixteen scoring tiles will be scored.

Thanks to the scoring tiles, each game is different and leads to different tactics and strategies, but having enough money is useful no matter what else is going on. Managing that money can be tricky, though. Each turn, each player places two area tiles in front of them and sets the selling price for the tiles. Setting a high price is great, but only so long as someone actually pays the price because if no one opts to buy, then the seller must buy the tiles at the price they previously requested.

In the end, the player with the best kingdom — and not the richest player — becomes the sovereign of the island. 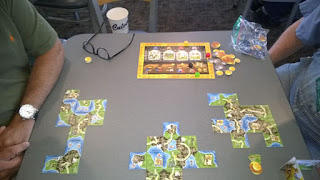 You need to bid on the tiles you wish to acquire or protect the ones you draw with your funds, so having enough money is always a concern in this game.  So, too, the mechanisms in place to prevent runaway games are monetary boosts to the trailing players and they increase the further back a player might be, so this game becomes very competitive all the way to the end.  Ultimately, making wise choices on which tiles you choose and protect, and how you place them, will define the best player in any given session of this game. 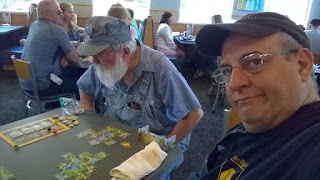