Over on initiativeone.blogspot.com, the insightful Wayne Rossi looks back at early D&D artifacts here.

Also, on meleewizards.com, they corral all things Melee and Wizard, two classic, early Steve Jackson games.  "Over 30 years ago [closer to 40!] a company called Metagaming released a small set of miniature combat rules simply named 'Melee.' Shortly afterwards another of these 'Microquest' games was released and was named 'Wizards.'"  Learn more here. 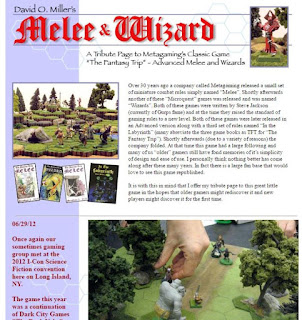 Finally, on the ClockMonsterLA YouTube channel, check out an old "SPI Infomercial."  Enjoy!