I got down into Illinois recently to push some minis around with my buddy Floyd using the rules for Bolt Action (2012).  To say that Floyd knows how to set a table is an understatement.  He's an enthusiast for a handful of game systems and has a diverse collection of minis and terrain, much of which is useful from one to another, so gameplay is always very visually appealing.  Although it has been some time since I have played using any post-gunpowder rules, I jumped at the chance to roll some dice using Bolt Action with him. 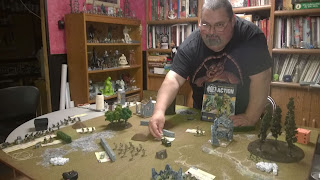 
Written by veteran game designers Alessio Cavatore and Rick Priestley, Bolt Action provides all the rules needed to bring the great battles of World War II to your tabletop. Using miniature soldiers, tanks and terrain, you can fight battles in the shattered towns of occupied France, the barren deserts of North Africa, and even the sweltering jungles of the Pacific.

Players get to decide which of the major or minor World War II powers they would like to represent, and then construct their armies from the lists provided. Army options are almost limitless, allowing you to build the kind of army that most appeals to your style of play. The choice is yours. 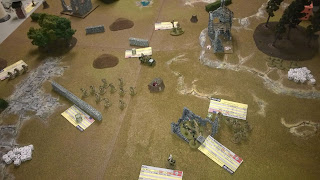 It's a system that's easy to learn and quick to play that was greatly enhanced by the squad cards Floyd had printed up in advance.  His figure collection represents the squads we had at our disposal, so choosing sides and setting up our armies via point buy was simple.  We jumped right in after only a short time going over some particulars in the rules.  Some bad luck with air support put the Germans on their heels in the early going but it proved to be less troublesome than putting forth specialists more so than grunts.  The Germans needed more guns if they were going to overcome their early misfortune and numbers proved to be the deciding factor as the opponents engaged more closely.  There are ways to mitigate some potential losses that will definitely be employed in future conflicts.  This is a fun system I hope to play again soon to help Floyd gain even more experience before he gets into some tourneys in 2016 at conventions he has lined up. 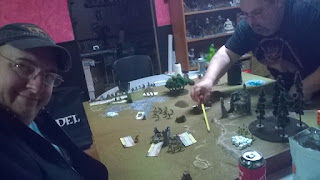