I've managed to get in a handful of games of Alien Frontiers (2010) each month since September this year with about a dozen people in three to five player games.  It's proven to be one of my new favorites.  I've been taught the game and played with all of the expansions and even returned to the base game and taught a few new players myself.  Most recently, I taught two new players for a three player session of the base game.  Even with new players, it was challenging for all of us and great fun. 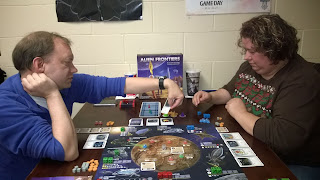 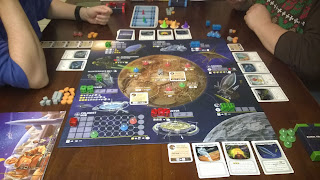 I think one of the reasons I keep coming back to this game is how easily a new player can compete with veterans.  That is due both to its balance at all levels of play as well as how easily even a new player can take to it and incorporate complex strategies.  While the Alien Tech cards have become more familiar, the various combinations that might become available during play continue to surprise me with their avenues toward alternate strategies.  I'm going to keep playing this one and report on it into the new year. 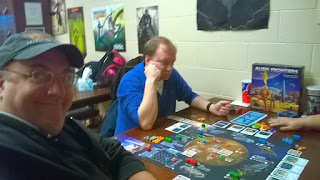