Ernie, Tom, and I got together to play a Christmas game on the eve of the holiday and share a little cheer.  Although we topped off the afternoon with some Liar's Dice, we first played a couple of games of Mogul (2015) which Ernie had recently picked up.  It turned out to be a wonderful way to start off the holiday. 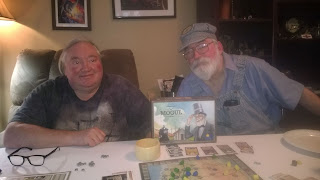 
In the 1920s, the U.S. stock exchange experienced a period of growth previously unknown. Everyone speculated, and many become millionaires overnight.

In Mogul — a revised and expanded version of the 2002 game of the same name — players buy and sell railway stock, trying to outsmart both the opponents and the market. Each of the five railroad companies has five to eight shares [the copy Ernie has had 6, 7, 7, 8, and 9 shares for the five railroads. - ed.], and in addition to being a share of the company, each share card has a box on it that indicates another company. Players start with particular stock holdings based on the number of players in the game and their position in turn order.

Each turn, one stock card is revealed from the deck. Players earn $1 for each share of this color that they own, then an auction ensues. Turn by turn, players must drop one of their bidding chips into a bowl in order to stay in the auction. When a player passes, whether by necessity or choice, they take all of the chips from the bowl, thereby earning bidding power for future auctions.

When all but one player has passed, this last player wins the auction and has the right to either keep the share or sell stock matching the color of the company depicted on the bottom of the share; the player who dropped out of the auction last takes the action that the winner didn't take. If a player sells stock, they either sell all shares of this color that they own, earning as much for each share as the number of those stock cards face up on the table or they sell none of them; in the latter case, the player places a station depot in their color on an empty space of the appropriate color on the game board. This game board has multiple networks in the five colors of the game, and at game's end each depot has a dollar value equal to the number of that player's depots in the same network.

When the crash card is revealed from the deck, the game ends. Players earn $1 for each share still in front of them and each five bidding chips they hold, in addition to the value of their depots. Whoever has the most money wins! 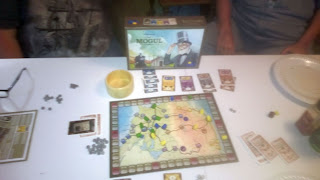 With just two pages of rules and a few options to take on each turn, it seemed like it would be simple enough.  It was simple enough to play but the strategy in this game can run pretty deep.  One definitely needs to make a move at just the right time and be ready for others to try and thwart you.  Just as with the real investors in in the early railroads, overextending oneself can be disastrous.  Fast and fun! 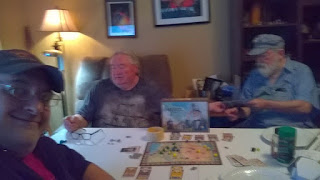