Joe was kind enough to bring out his Formula Dé (1991) game to the last First Sunday event.  He has all of the racetracks and picked one out that was fairly easy since the rest of us were very new to the game or complete novices. 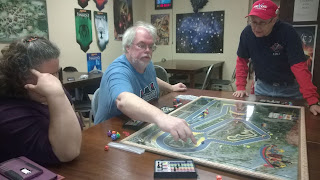 
Formula Dé is a fast-paced racing game in which the cars' top speeds are limited by having to end a certain number of turns in each curve of the racetrack. This can be tricky, because although players can regulate their speeds by choosing which gear to be in and each gear allows a certain range of movement, the exact amount is determined randomly. Great fun for a big group. 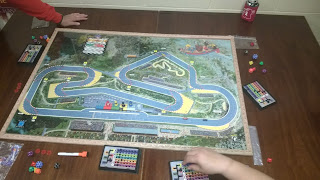 Joe gave us each an extra pit/repair token and we had a blast running around the track for three laps.  The weather was wet and rainy the first lap but cleared up swiftly and stayed that was the rest of the race.  One player stalled out at the start and never really recovered but ran a good race trying to catch up.  Only one player had any significant damage but managed to finish the race in second.  I had some very good luck and never pushed my vehicle to its limits, so I managed to finish without any real damage.  All in all it was a good time and I can see how this has been a longtime favorite of its fans! 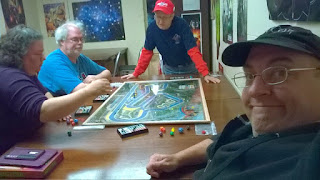