I've now played Tiny Epic Galaxies (2015) a few times since early October and still haven't tried it with the Tiny Epic Galaxies: Satellites & Super Weapons Mini Expansion (2015).  I am interested but it plays very well without it and hasn't yet lost it's shine.  This time we played with four players and the final scores tend to be fairly close or at 30 points. 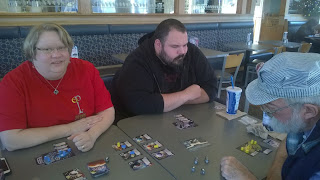 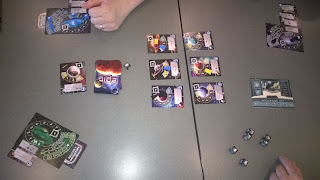 This is definitely a very fast game that folks can slip into an hour here and there.  This game is very good at keeping everyone constantly involved in the game by allowing players to follow actions by paying for and repeating those actions.  But because this is happening on everyone's turn and some planets can cause further cascade effects, there is a real danger for some players to be overwhelmed.  However, after playing a few times, there needs to be fairly strict adherence to the rule about players getting only a brief moment to decide if they wish to follow another player's action.  We've only seen slight trouble with this but we all know some players for whom analysis paralysis is a struggle.  It helps if the player whose turn is currently going directs the other players to respond or, possibly, if there is a house rule that the current player need only pause and allow the others to chime in if they are definitely following.  It's a tricky business balancing the incentive for fast play with allowing slower players time to catch up.  But half-hour long games that take two hours can get old very quickly.  Fortunately, we can knock this one off in less than an hour and if we play two, the second always goes much more quickly. 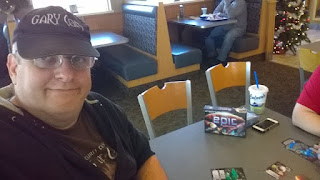