As the last First Sunday event was winding down, Nancy busted out her copy of Mars Attacks: The Dice Game (2014) for us to play.  We had six players and played two quick games.  Steve Jackson Games has quite a few dice games and a number of card games that are largely about the luck of the roll or the luck of the draw, so I don't play many but I like to try them out from time to time. 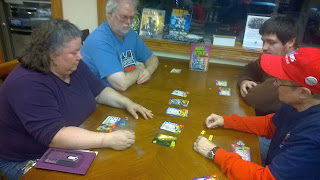 
In Mars Attacks: The Dice Game, the Martian players compete to see who can subjugate which U.S. cities first.

At the start of the game, four stacks of cards are dealt out randomly, with each stack having as many cards as players. On a turn, the player first declares which city he wants to attack, then rolls all ten dice. Any dice showing the "nuke" symbol are locked and cannot be rerolled. Laser guns are similarly locked, allowing the player to reroll only the alien heads. If he rerolls and ever has as many nuke symbols showing as the number on the face-up cards and the supplementary token, his turn ends; otherwise he can stop at any time, and if he doesn't have enough guns or alien heads to claim his target, he marks his total with one of his tokens, allowing him to add on to this number on a future turn — assuming that someone else doesn't claim the card first.

Some city cards have special powers, such as Seattle's, which allows you to place one die on the symbol of your choice prior to rolling. Las Vegas, true to its nature, wants you to go bust multiple times in order to claim the card. Whoever ends up decimating the largest portion of the earth wins. Ak ak ak ak ak! 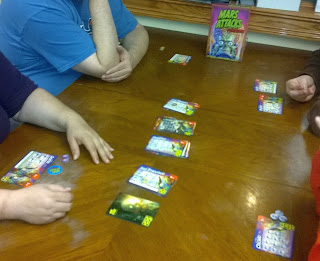 It's definitely a game where rolling well is going to be more helpful than any planning or strategy.  Nevertheless, there are some ways to enhance your chances.It seems prudent to snag any easy points if they come up just prior to your turn.  Chances are they won't be around for long.  In six player games, getting in on the bigger cards can be a waste of a turn, again, unless you get lucky.  So, don't allow that to be your whole game.  I've only played twice, so that's about all I can fathom thus far.  I'm not big on dice games that mostly involve luck so I'm not sure when I will get to play this again but I won't rulle it out. 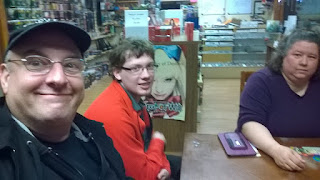