Once in a while, it is fun to take a game that has been expanded, and to which you like and use the expansions, and give just the base game a play or two.  That's just what we did last week when teaching Norm the joys of Lords of Waterdeep (2012).  He's an avid D&D player who loves the Forgotten Realms, as well as a regular board gamer, so it was both a surprise that he hasn't played before and not surprising that he liked it. 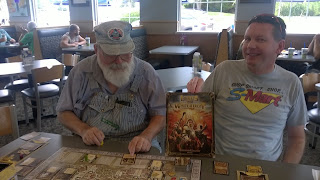 
Waterdeep, the City of Splendors – the most resplendent jewel in the Forgotten Realms, and a den of political intrigue and shady back-alley dealings. In this game, the players are powerful lords vying for control of this great city. Its treasures and resources are ripe for the taking, and that which cannot be gained through trickery and negotiation must be taken by force!

In Lords of Waterdeep, a strategy board game for 2-5 players, you take on the role of one of the masked Lords of Waterdeep, secret rulers of the city. Through your agents, you recruit adventurers to go on quests on your behalf, earning rewards and increasing your influence over the city. Expand the city by purchasing new buildings that open up new actions on the board, and hinder – or help – the other lords by playing Intrigue cards to enact your carefully laid plans.

During the course of play, you may gain points or resources through completing quests, constructing buildings, playing intrigue cards or having other players utilize the buildings you have constructed. At the end of 8 rounds of play, the player who has accrued the most points wins the game. 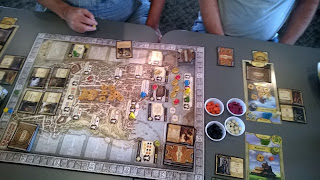 Norm definitely played well with Tom and I scores were typical of veteran players in our second time through.  I think the first time through was less about completing quests and more about trying all the options.  Still, even I was impressed just how fun this game remains in its base form with three players.  I think with four players, definitely with five, the expansion would keep the game from feeling too crowded.  I do want to try it with five as a base game again, though, since it must play well enough for us to have enjoyed it that way pre-expansion and I don't recall having any complaints then. 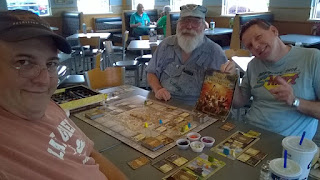