I wrote about the cool fan-made version of Tom Wham's Search for the Emperor's Treasure (1981) that was sent to Tom and played by us here.  It was lots of fun and we decided to break it out again last Friday for what turned out to be a rather quick game. 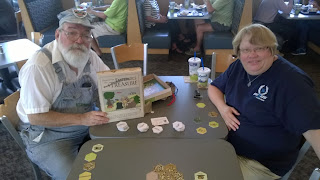 I snapped a few pictures while we were getting the modular board together and sort the characters and spells, then dove right into playing.  One of our house rules when playing at Culver's has been that we play until one player draws a second Imperial Treasure and the winner is whoever has the most treasures overall. 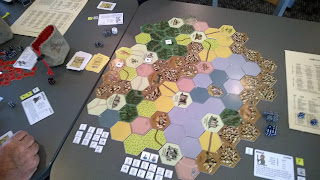 As it turned out, in six turns, one player drew a second Imperial Treasure and had six treasures, one or two more than the others.  It was, perhaps, the fastest game we've played taking a little under an hour including set up.  We probably need to revise that game-end mechanism. 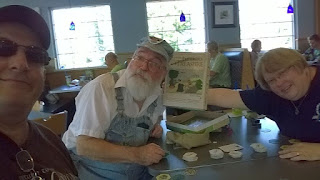