I came across a copy of Empires of the Middle Ages (1980) in the early double-naughts, before the 2004 reprint came about.  Perhaps someone was selling their copy with the intention of picking up the new edition.  I got it at a good price, as I recall.  I've yet to play a game though I hear good things from most folks who discuss it and it looks quite innovative for its time.  I owned, played, and enjoyed other games published by SPI around that time or just earlier, like Patrol! (1974) and Invasion: America (1976), so I picked it up knowing I would enjoy it too.  I just haven't made the time. 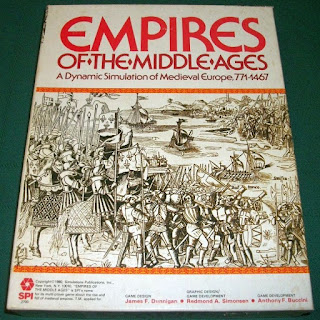 
This classic SPI game from 1980 covers the economic and political landscape of Medieval Europe from 771 to 1467 on an area map. Several scenarios allow players to do anything from a solitaire game during the Charlemagne's reign to the "Grand Scenario" that covers historical trends throughout the period.

Decision Games published a second edition in 2004, with a differently styled map. It added optional expansion rules & counters for Armies, Fleets, and Civilization Markers, along with additional Event Cards -- raising their number from 56 to 164.

At the start of each player's Round, Event Cards are drawn which change the strategic situation (such as Plague or Bounty) or benefit a player in various ways. The descriptions of the Events contain a great deal of historical information, adding much interest to the game.

Each player may attempt to perform up to five "Endeavors" per 25-year long Turn.
There are six types of Endeavors: Conquest, Pillage, Diplomacy, Defense, Fortification (including building Armies/Fleets) and Ruling. Additionally, moving Armies/Fleets and Taxation may always be performed.

Endeavor resolution is diceless; instead "Year Cards" which show an array of results for each type of Endeavor are drawn. The card might also require a Leader Stature Check, which can change the player's Combat, Administration, and Diplomacy ratings.

Endeavor resolution is affected by the appropriate Leader rating, and the involved areas' language, religion, population, and Social State (which changes frequently). Poor performance can lead to Unrest or Rebellion in an Area.

An area's Social State value rises and falls as a result of Events and Endeavors, and improving the Social State of your empire is an important object of play. 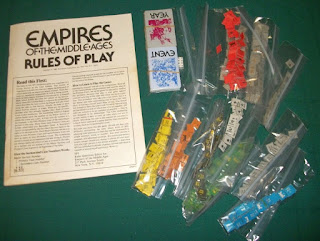 Considering this game can be played solo, it's for one to six players, I'm not sure why I haven't squeezed it into the schedule for an empty weekend.  They do come up once in a while.  The rules might be considered heavy by some, being an old wargame, but the book is only about twenty pages.  There were only three counter sheets, too, and they were the two-thirds size (they each are only the size of two-thirds of the bookshelf box interior).  Perhaps this blog post and my final paragraph are simply attempts to talk myself into playing it sooner rather than later.  And check out the very cool, large map! 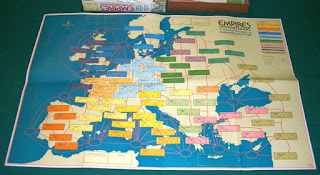