One of the games we regularly played as the group was straggling in for our D&D games in the 1980s was Wiz-War (1983).  It was fast paced, scratched the fantasy itch, and provided hours of fun in half hour to one hour splashes.  Granted, the game can take twice that long when you are new to it and if you aren't be aggressive but we played the game well, we played for blood, and we played for quick resolutions.  It was as cutthroat as any game I've ever played. 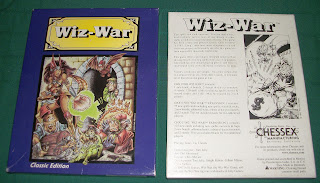 
In this light, beer & pretzels type of game, players are transformed into wizards attempting to collect treasures from a twisted little maze. At the heart of the game is a deck of cards that the players use to cast spells, power-up spells, and augment movement. Each turn, players can move up to three spaces (or more with the use of number cards). However, the goal is to penetrate the other players' sections of the maze, pick up one of their treasures, and bring it back to your home base. The first player to capture two such treasures or kill all the other wizards is the winner. 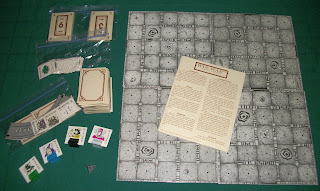 I currently have a copy of the "Classic" game printed by Chessex in 1997, which is just as good as the original, and I have yet to play the newish Fantasy Flight Games version yet (though I'd like to try it someday).  Admittedly, the older version does allow players to get knocked out of the game which I think they changed in the newer version but the game doesn't last so long as for that to be a big deal, IMO.  I know that modern boardgaming design dictates that being knocked out of a game before it is over isn't "fun" but in shorter games, I think that can be minimally problematic.  I need to introduce my regular crew of gamers to this traditional D&D side game soon, I think.  Maybe tonight! 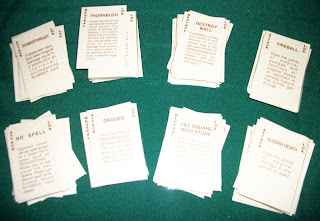