There was a Rummikub tourney at the 2014 Chicago Toy & Game Fair on November 22nd, this last weekend.  Rummikub is a classic game first mass-produced in 1977 with a description on Board Game Geek as follows:


The game is based on the traditional middle-eastern game of Okey. First created in the 1930s and sold in hand-produced versions until the late 1970s.

Similar to the Rummy that you play with cards - you try to get rid of all your tiles by forming numbers into runs of 3 tiles or more, or 3 to 4 of a kind. The colors of the numbers on the tiles are like card suits. This game may start rather uneventfully, but when the players start putting more and more tiles in play, the options for your upcoming turns can become more complex, challenging, and exciting (from areyougame.com). 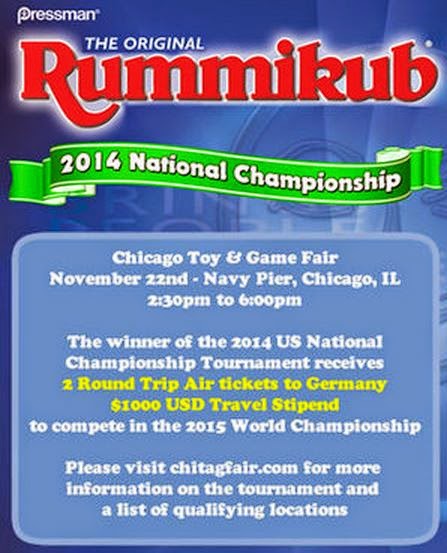 As of this posting, I have been unable to find out the results of the tourney from ChiTAG, so if you have news, please share it.