Conan: Hyborian Quests (2015) is a game I am looking forward to seeing published.  It would appear it will combine some of the best elements of tabletop RPGing with miniatures skirmish gaming all wrapped up in a Howard-esque theme.  The Kickstarter is slated for January of 2015 with a general public release planned for Gen Con later the same year. 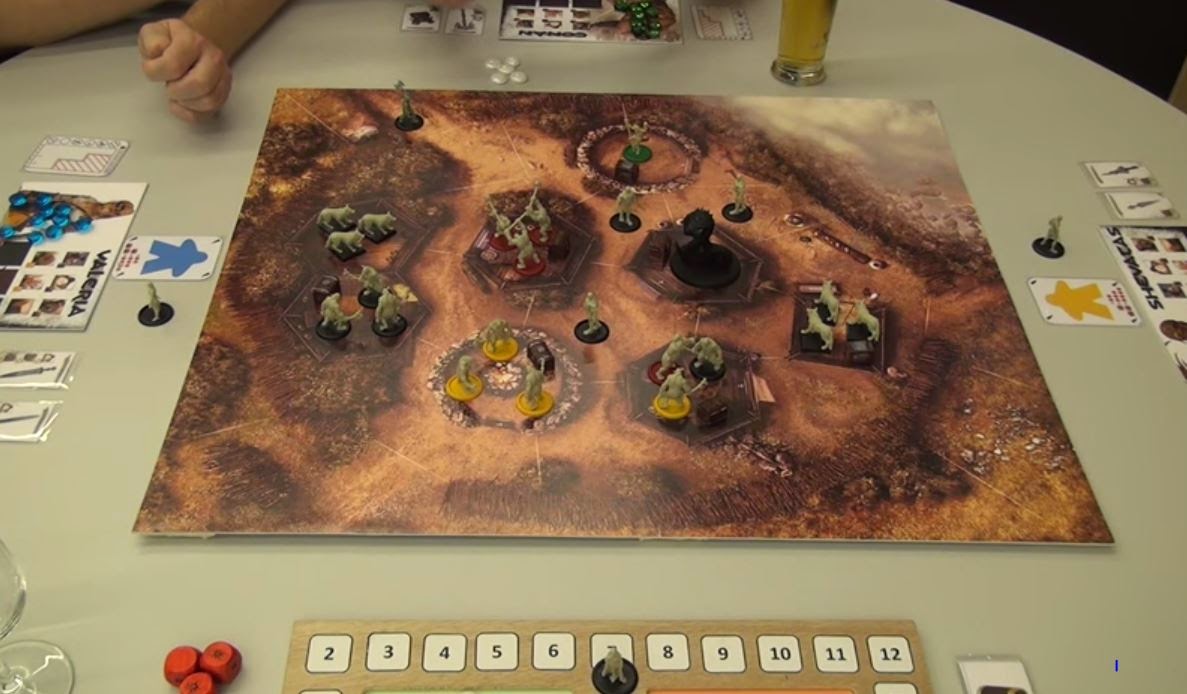 
Conan: Hyborian Quests, designed by Fred Henry and based on the Conan universe by Robert E. Howard, is a scenario-based semi-cooperative asymmetric miniatures board game. One player is the Opponent, playing the Opposition forces, and the other players (1 to 4) play Conan and his companions: Shevatas the thief, Hadrathus the Priest/Sorcerer, Belit the pirate queen, Valeria the warrior, etc. The game is based purely on Robert E. Howard's novels and short stories (and not the movies or other non-Howardian material). The publisher has hired Patrice Louinet, a Howard expert, to make sure the art and the scenarios are compatible with Howard's vision.

Each game is a scenario, played on a map. There will be several maps — Pictish Village, Underground temple, Tavern, Pirate ship, etc. — and each map can have several scenarios set on it. The game is fast, one hour approximately. It's possible to play several scenarios in a campaign, but you can also play each scenario individually. There will be a dozen playable scenarios in the base box.

At the beginning of a scenario, players choose their team (Conan and two or three other heroes). The Opponent gathers all the miniatures (picts, Necromancer, skeleton warriors, monsters, etc.), tokens, cards from the chosen scenario. The game usually plays in a limited number of turns (ten, for instance). Each scenario can have very different objectives: find the princess captured by picts and hidden in a hut and leave the camp before the pict hunters return; find the magical key to open a sealed door, steal the jewel and leave; kill the Necromancer by the end of turn 10; survive by the end of turn 10; escape the prison; etc.

During their turn, the heroes can activate or rest. If they activate, they can spend "gems" from their energy pool to do all sorts of actions: move, fight (melee or distance), defend, pick a lock, reroll, etc. If they rest, they can move a lot of gems from their "spent" pool box to their "available" pool box. When they take an action, they throw a number of dice equal to the number of gems they put in their action. There are three different kinds of dice: yellow (the weaker dice), orange (medium) and red (strong). Each character has a color based on their specialty: Conan throws red dice in combat while the Sorcerer throws yellow dice in combat; the thief throws red dice in Manipulation actions, while Conan throws orange dice; etc. Each player can have equipment cards (armor, magic potions, weapons, etc.) which give them bonuses on their dice rolls.

The Opponent plays differently. He uses a board with eight slidable tiles, plus his own Energy gems. Each tile corresponds to one unit (1 to 3 miniatures) on the game mat, and all of the miniature abilities are written on this tile (movement, armor, attack, special abilities). The tile position on the board corresponds to the numbers 1-8. The Opponent has a pool of energy gems and each time he activates one unit, he needs to spend a number of gems matching the tile placement: tile#1 costs 1 energy gem, tile#2 costs 2 gems, etc. Whatever tile the Opponent chooses to activate, he spends the corresponding energy cost (moving his energy gems from the available pool to the spent pool), then takes the tile out and moves it to the end of the sliding track: If he wants to activate this unit again, it will cost him 8 gems, because the unit is now on position 8. The Opponent can activate a maximum of two tiles, and he regains only a certain number of gems each turn (depending on the scenario).

In a typical scenario, the heroes need to accomplish something and the Opponent wins if the heroes fail to reach their objective — but in some scenarios, the Opponent has his own objectives and the Heroes win if they prevent him from accomplishing his goal.

The following is a Board Game Geek TV video shot at Essen with a company representative and uploaded to the BGGTV YouTube channel: