I'm playing a number of classic boardgames/board-wargames at Gary Con VI this (long) weekend and yesterday that meant playing Kingmaker (1974) from Avalon Hill.  As described on Board Game Geek -


Kingmaker simulates the Wars of the Roses, the period of sporadic Civil War in England between 1450 and 1490. Ruled by a weak and mentally unstable king, Henry VI, demoralized by the defeat in France at the end of the Hundred Years War, and encouraged by the ambitions of Richard, Duke of York, and his sons; the country's Noble families used their large private armies in attempts to gain control of the government.

The game is based on the premise that the powerful Noble families used the Lancastrian and Yorkist princes as pawns in a greater game of gaining control of England. Players control factions using their military and political power to control and influence the royal heirs, supporting the heir in their control as king while trying to take down all of the other heirs.

I've always had fun playing this game and introducing it to new players, young and old.  Some folks do not love the events deck which can be brutal to those who do not gird their strategy against any eventuality, but I find the unpredictability of plagues and calls to duty as well-based in historical possibility. So, too, when the deck is used to determine the outcome of battles, there is a chance that the nobles involved can perish, leaving a player's plans in disarray.  However, Kingmaker is also a game where someone can lose everything in the course of their attempts to control an heir to the throne, yet turn things around while switching sides and supporting yet another heir. I also find that to be true enough in spirit to actual history so as to make it a fair expression of what can happen in the game.

We played with three and managed to finish in three hours, including a couple of breaks which cut actual game time down to about two and a half hours.


I was dealt a solid group right from the start 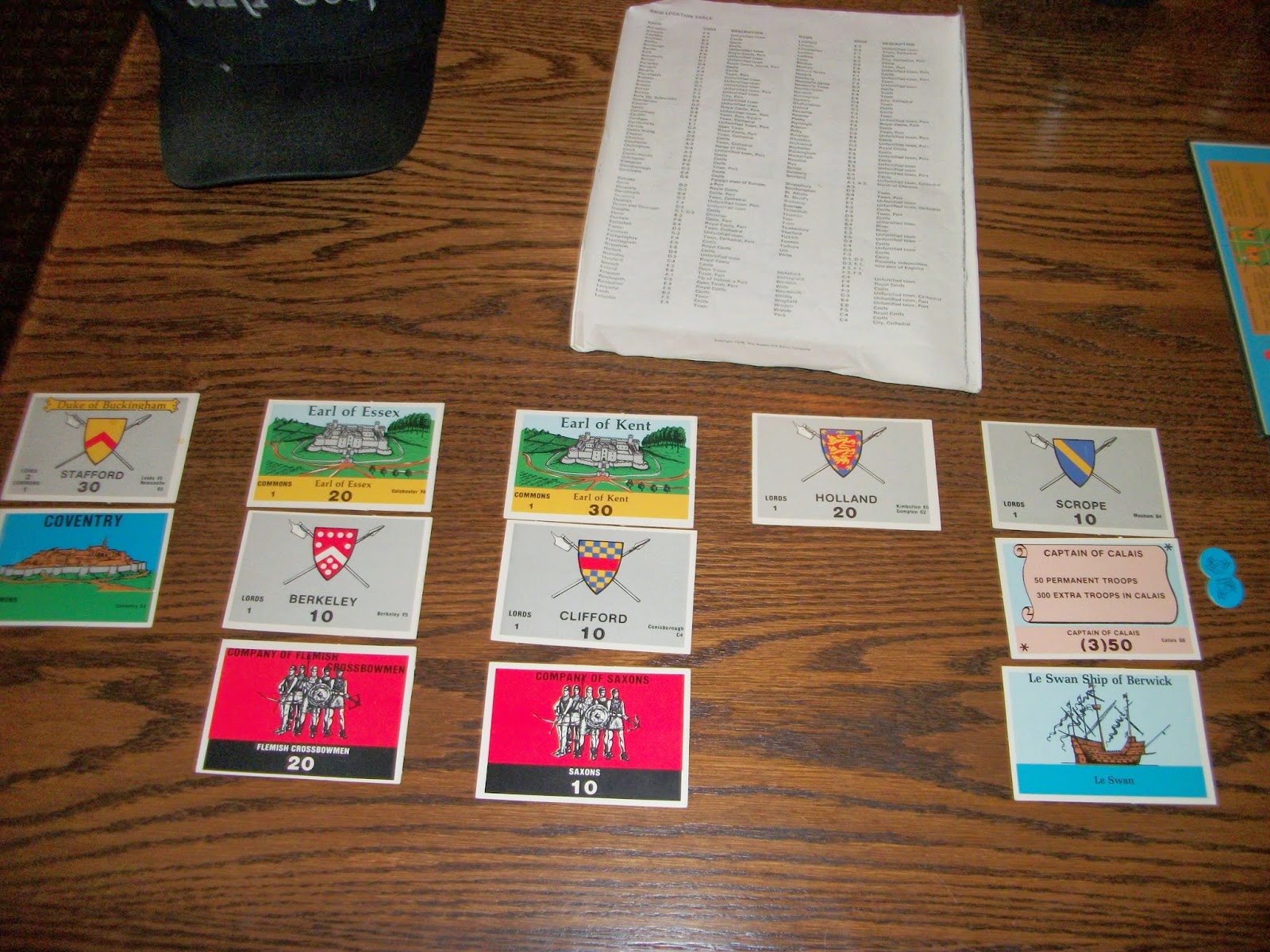 Fred's son was holding some good cards as well 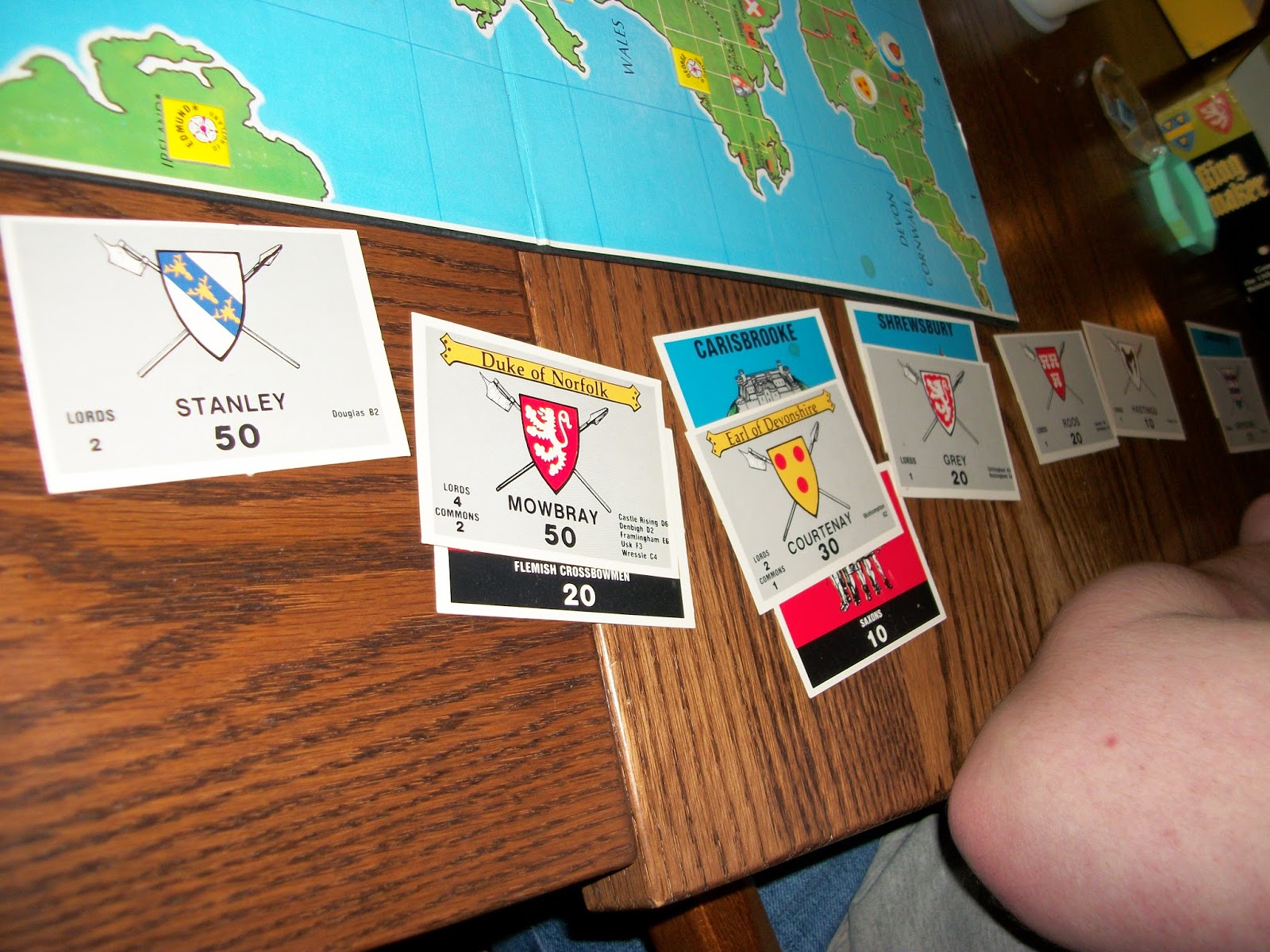 Fred's cards were decent but without many individual nobles 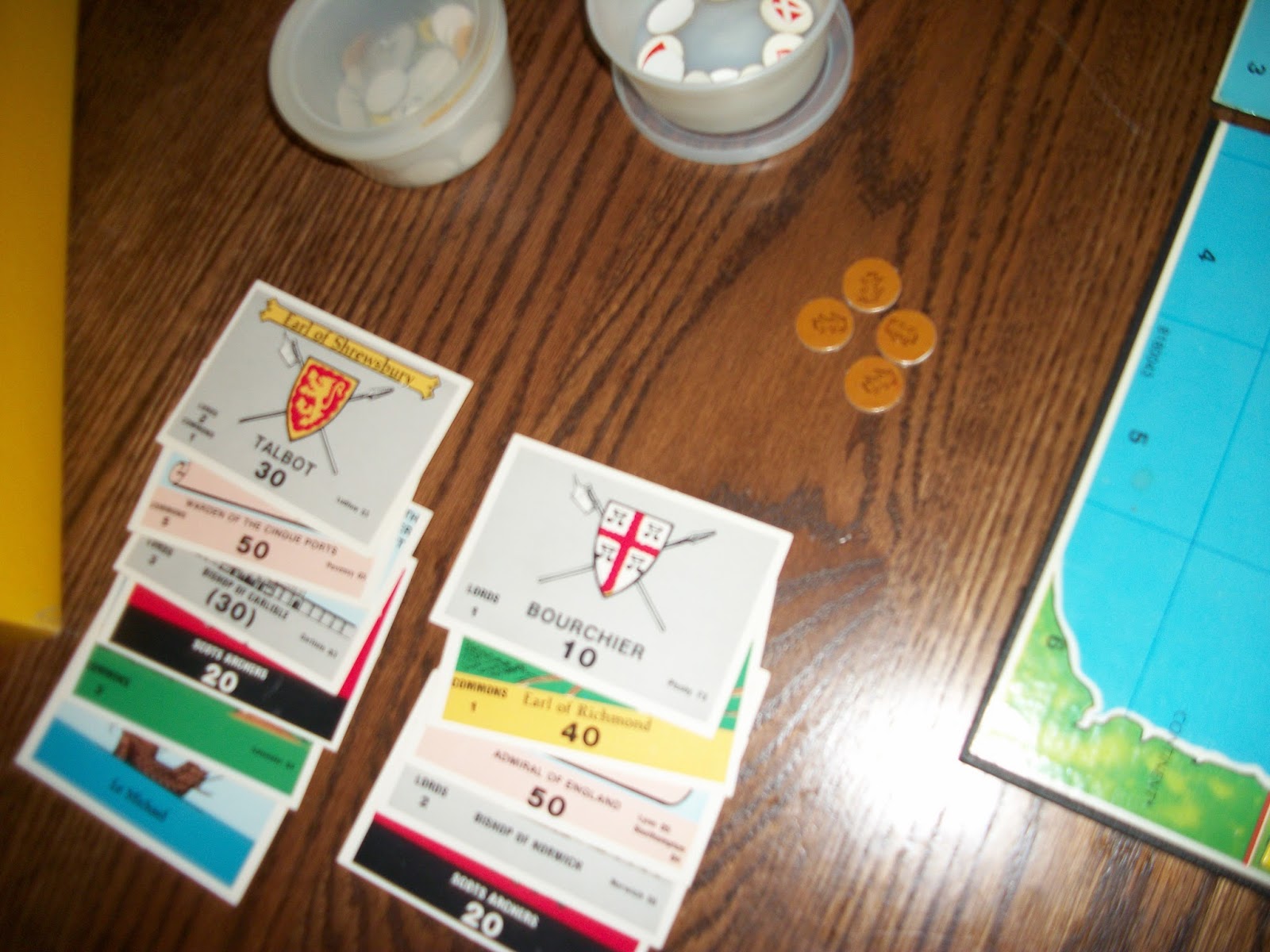 We all had some work getting our nobles closer to one another and although I snapped up Margaret in Coventry, a plague knocked her and one of my nobles out right away.  So, too, my noble Scrope, who I made the Captain of Calais, sailed down and sat on young Richard, and he too was wiped out by plague.  It seemed every heir I gathered would be struck down.  No matter, there are more of them. 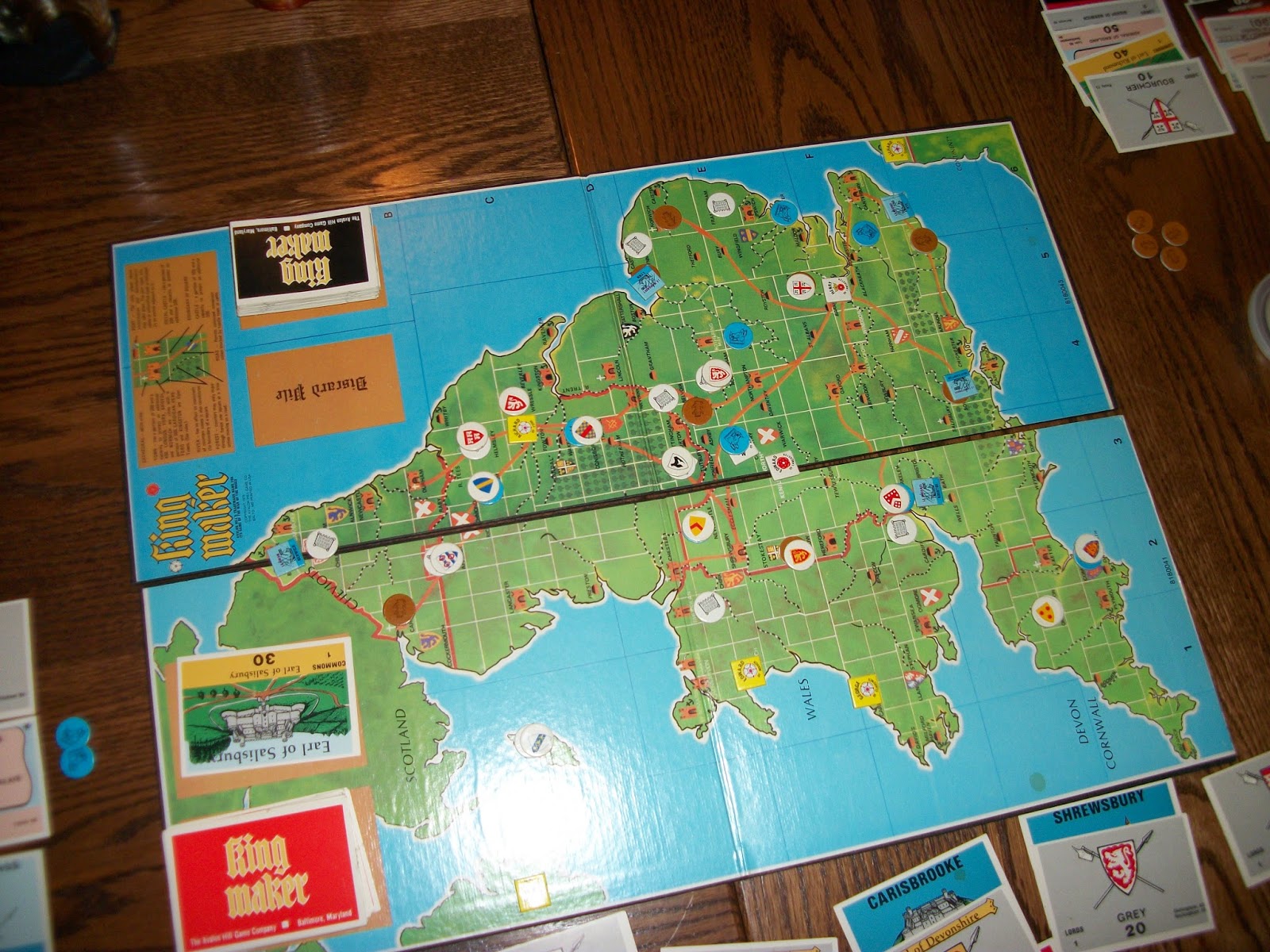 Wearing my new lucky Beholder hat (Thanks diaglo Dave!), I plotted and schemed my way into destroying several more heirs even as Richard the elder and Henry remained in their starting locations of York and London, respectively. 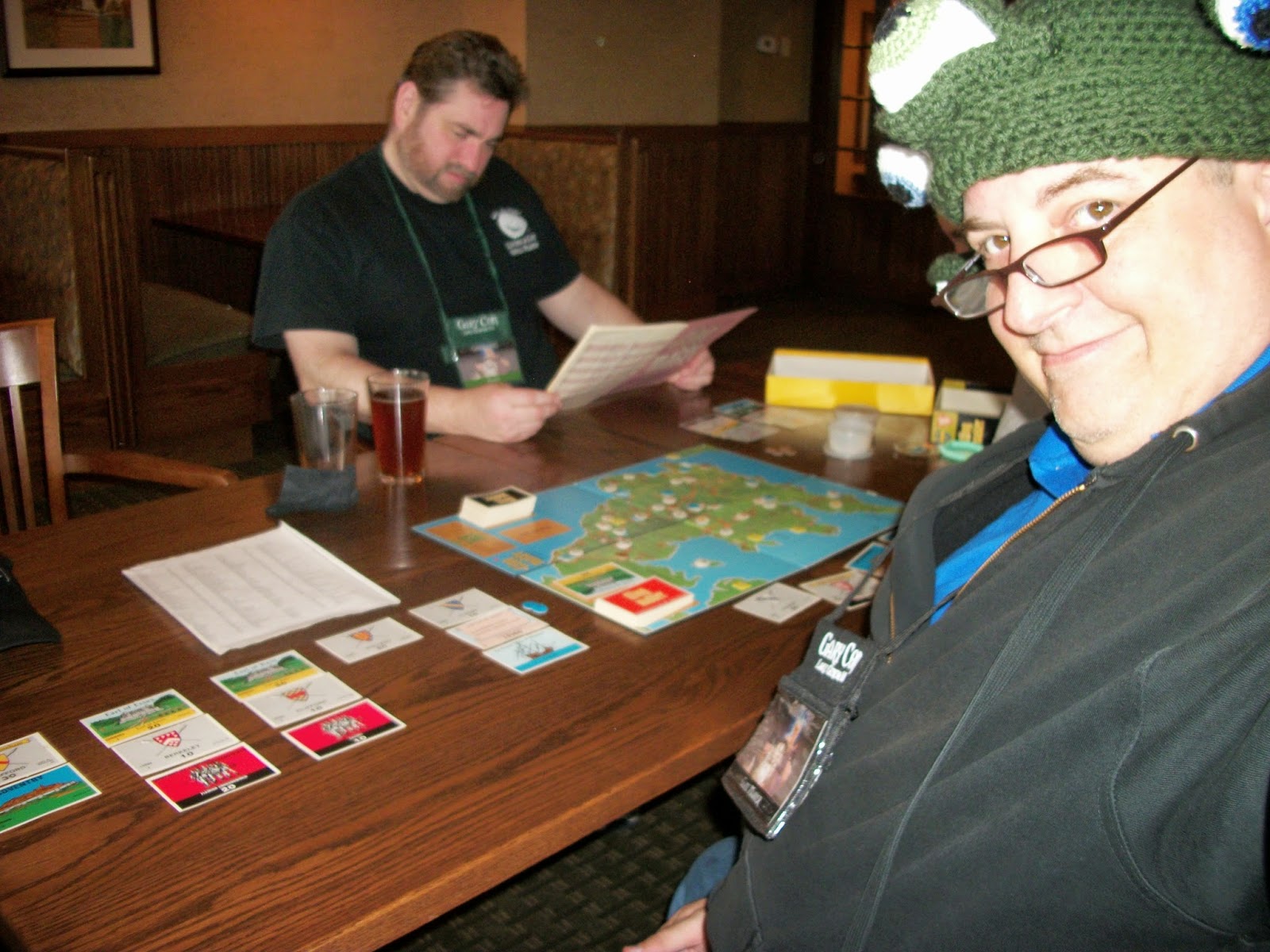 I was able to use my connections in Cornwall to halve Fred's starting forces and although my own nobles kept getting drawn back to their territories to quell revolts, I was able to keep their factions strong enough to deter direct assaults for awhile.  I was also able to gather York's Edward and George in the battle with Fred's subsequently-executed noble then remove them from the equation. 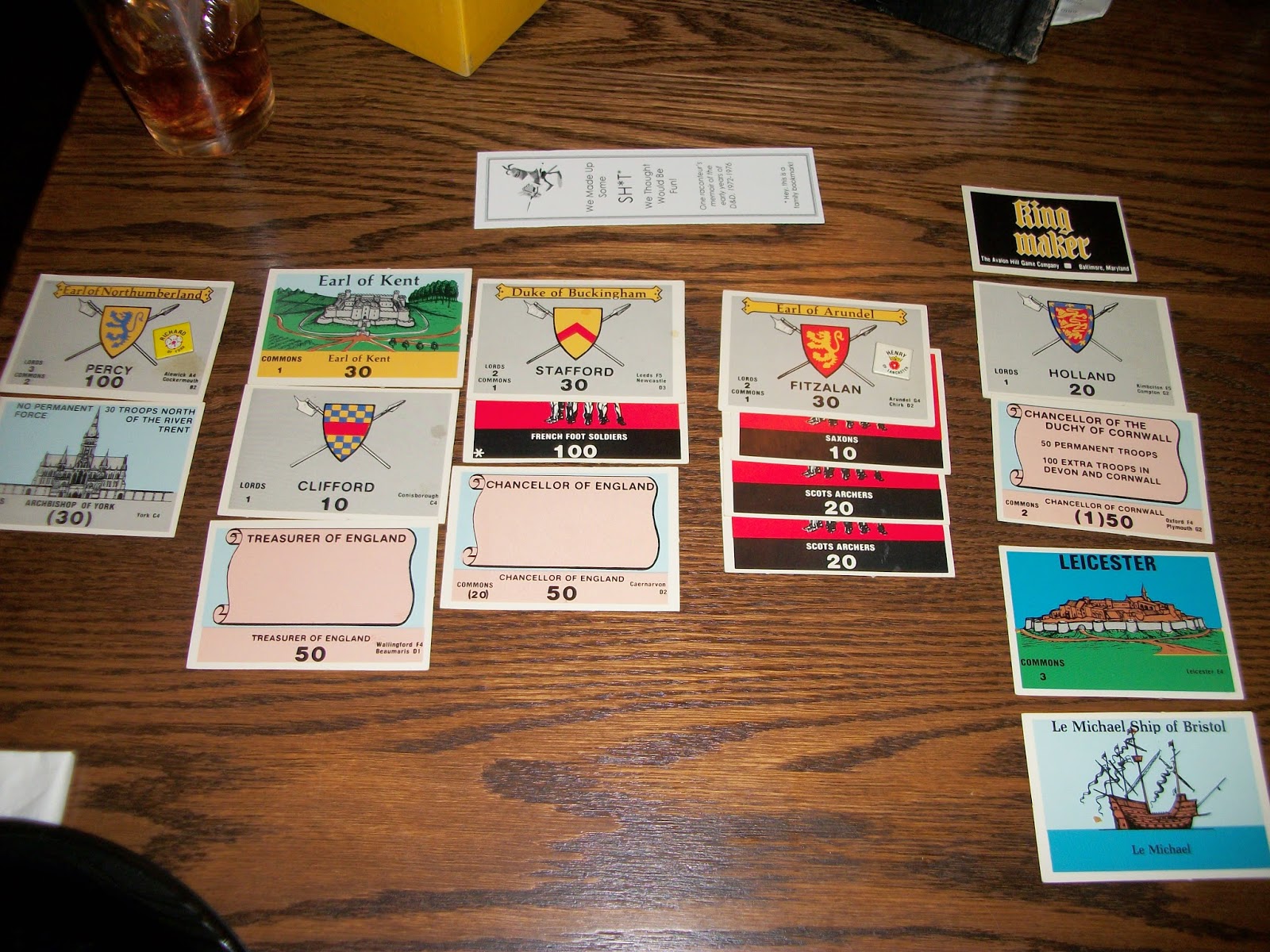 It all came down to Fred's son making a move on the largest of my thin-spread forces, but some bad weather held him at bay and I was able to slip from his grasp.  Finally, a lucky chance of gaining the arch-bishopric of York at the same time as Henry was called up to Preston allowed my far-flung forces to snag the heads of both households.  With the highest of the bishoprics in my possession, as well as the chancellery, I was able to call a parliament and force the remaining heir, Lancaster's Edward, Prince of Wales, by way of Writ, into striking distance.  Everyone attended and the forces were close enough that a mere majority would be the scant advantage once the King's Peace was ended.  Knowing how swiftly even that slight lead can vanish, I chased down the final obstacle to holding the sole heir and finished the dirty job in Northern Wales.  Both forces numbered in the 600s and no nobles died in the actual battle.  The Prince was dead, Long Live the King! 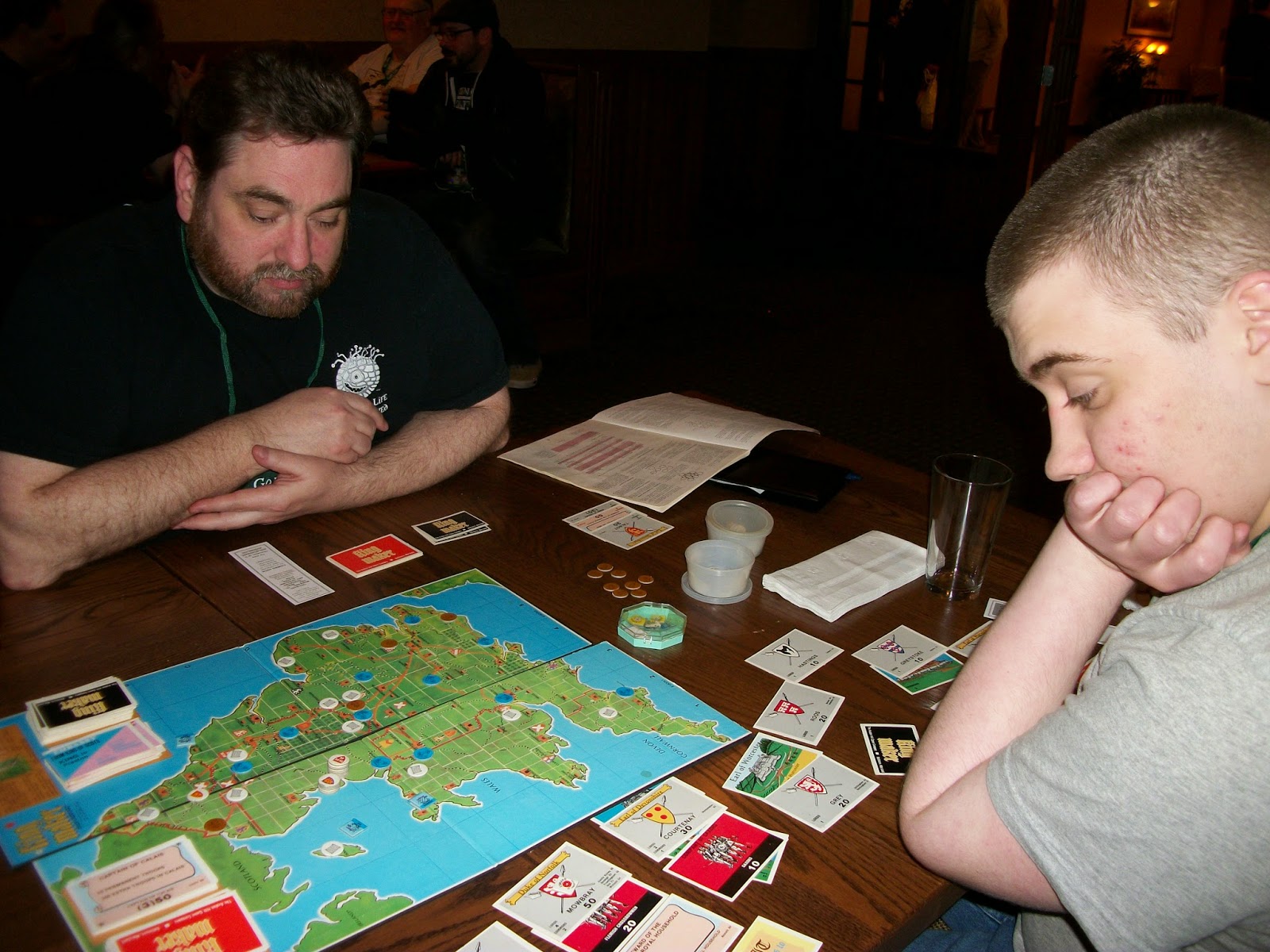 We had a great time and I thanked them both for joining me.  I did have some good luck in the cards but, as I said during the game, "Fortune favors the bold."  And I think they would both agree that I jumped on each opportunity and didn't allow any of the bad turns I had to deter me from taking full advantage of the offsetting good turns.
Posted by Mark CMG Clover at 7:00 AM