Hordes of the Things - Ally Battle

Just when you thought it was safe to go back in the desert.  My ally, a Goblin Army, and my Dwarves worked hard last turn to keep the advancing armies at bey.  It worked fairly well, too, but for one territory we could not retake.  It was a desert territory the Goblin Army and my Dwarves had faught over prior to becoming allies.  He had a distinct advantage, in that the enemy had no retreat, and early on the Goblins were well up but the dice were not with him when it came down to finishing the enemy off.  In his own words -

I chose to go at his left (where his shooters were) with my warband and beasts and shooters while holding the center with my 3 riders, 2 hordes, a shooter (in my dune) and my flyer. In the first 6 turns he angled his knights and rider out into the center of the board, attempting to pressure my left flank. However, I made a line of 3 riders, the hordes in a column and 2 shooters to his front, while holding my right (in front of the hill) with 2 beasts and a warband. Meanwhile, he threatened the dune to my left with a warband while his general (warband) stayed nearby with a shooter he had slid from his left.

Well, during turns 7, 8 and 9 I ran my 2 beasts all the way from my right flank to my left and into the dune. Turn 10 was the critical turn. [My opponent] had not seen what I could do with the beasts and reacted poorly, leaving his warband in the dunes while his general and shooter anchored his right flank near the dune. He made the bad error of moving his shooter into his line instead of backing it to support hi warband. He saw this problem too late and got a bit panicky, moving his flyer to the rear of my line to barker (Zone of Control) my 3 riders (one of my riders was my general). In my part of turn 10 I moved a shooter to get at his flyer with no recoil and L'd his warband in the dune with my beast and shooter. He lost both stands and his right flank was laid bare.

The next 2 turns had him marching backward as I advanced, hemming in his right flank and setting up the assault. Seeing his predicament he launched his one rider into a flank attack on one of my riders (which exposed his rider to counterattack the following turn) and we traded the riders.

Turn 16 came to be. He had used 65 minutes and I had used 35. His General being a warband hanging on the right end of his line, I attacked with general rider to his front, rider in support and flyer attacking his rear, along with another rider to neutralize his knight overlap and my beast right in front of his shooter (behind his right flank) in order to block his barker for my flyer. So, he doubles my beast with his shot (roll is 6-2). But, I have a 4-2 on his general, no retreat (72% chance to win the game)...he rolled a 3....I rolled a 1...push. No problem. in his turn he is so bad off on this flank that he could do nothing to stop the same battle again. So he throws a knight at one of my shooters in the center. 3-4 and he rolls a 6 to my 3 and picks up my shooter. No problem, I am 4-2ing his general again with no retreat (72% chance to win the game)...he rolls a 6, I roll a 3. No problem. On my turn I attack his general again...with no retreat and a 4-3 (58% chance to win the game). He rolls a 6, I roll a 1....

Now things have changed a bit. He has run 2 knights up to support his general and he L's my right most rider, killing it while he shoots my flyer down, which has been on his general's rear. But I kill a shooter in the center and we are both down 10 points in my turn of turn 18 ( I have about 15 minutes to go, he has about 3). I cogitate and set up a 4-3 no recoil on his knight (with my shooter in the center) in the center to win the game (58% chance)....he rolls a 6...I roll a 2. Now, I cogitated a bit because by moving my shooter to get at his knight I was leaving it a bit exposed to another of his shooters who could move to shoot me with no recoil. But, I did the math and there was a 17% chance that I would not kill the knight and he would kill my shooter with his shooter......... So, in his turn he moved the shooter where I thought he would.....and rolled a 6....to my 2...winning the game for him.

Even when you have a distinct advantage, there is a slim chance the dice will not roll your way, and such are the fortunes of war. 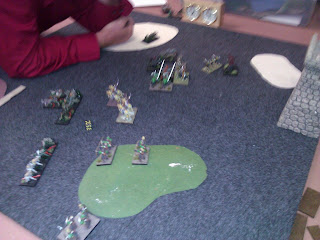 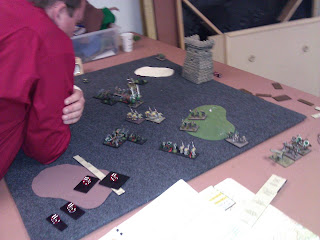